The Situation: Citrus huanglongbing (HLB), previously called citrus greening disease, is one of the most destructive diseases of citrus worldwide.  Originally thought to be caused by a virus, it is now known to be caused by unculturable phloem-limited bacteria.  There are three forms of greening that have been described.  The African form produces symptoms only under cool conditions and is transmitted by the African citrus psyllid Trioza erytreae, while the Asian form prefers warmer conditions and is transmitted by the Asian citrus psyllid Diaphorina citri.  Recently a third American form transmitted by the Asian citrus psyllid was discovered in Brazil.  This American form of the disease apparently originated in China.  In North America, the psyllid vector, Diaphorina citri, of HLB is found in Florida, Louisiana, Georgia, South Carolina, Texas and Hawaii, and recently arrived in Southern California from Mexico. HLB is known to occur in Florida Lousiana, South Carolina, Georgia, Cuba, Belize and the Eastern Yucatan of Mexico.  A federal quarantine restricts all movement of citrus and other plants in the family Rutaceae from Asian Citrus Psyllid or HLB-infested areas into California in order to prevent introduction of the disease. 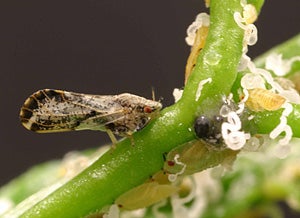 Damage:  The HLB bacteria can infect most citrus cultivars, species and hybrids and even some citrus relatives.  Leaves of newly infected trees develop a blotchy mottle appearance.  On chronically infected trees, the leaves are small and exhibit asymmetrical blotchy mottling (in contrast to Zinc deficiency that causes symmetrical blotching).  Fruit from HLB-infected trees are small, lopsided, poorly colored, and contain aborted seeds. The juice from affected fruit is low in soluble solids, high in acids and abnormally bitter.  The fruit retains its green color at the navel end when mature, which is the reason for the common name "citrus greening disease."  This fruit is of no value because of poor size and quality.  There is no cure for the disease and rapid tree removal is critical for prevention of spread.

Economic Impact: HLB is one of the most devastating diseases of citrus and since its discovery in Florida in 2005, citrus acreage in that state has declined significantly.  If the disease were to establish in California, the nursery industry would be required to move all of their production under screenhouses, pesticide treatments for the vector would be instituted resulting in greatly increased pesticide costs (3-6 treatments per year) and indirect costs due to pesticide-induced disruption of integrated pest management programs for other citrus pests.  A costly eradication program would need to be instituted to remove infected trees in order to protect the citrus industry. 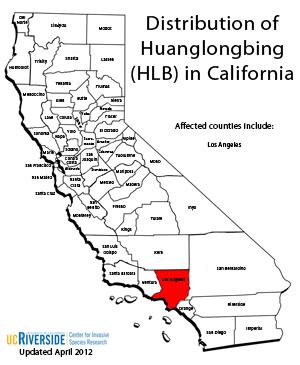 Distribution of HLB: In April 2012, after about a week of testing, the California Department of Food and Agriculture (CDFA) removed a pumelo tree with a lemon graft from Hacienda Heights in Los Angeles County after the tree and an Asian citrus psyllid found on the tree both tested positive for Huanglongbing. In 2005, HLB was also found in Florida and it is now known to occur in Louisiana, Georgia, South Carolina, Cuba, Belze and Eastern Mexico.  Worldwide, HLB is also present in China, eastern and southern Africa, the Indian subcontinent, Mauritius, Reunion, the Saudi Arabian peninsula, and southeast Asia.

Research:  Research is focusing on characterization of the bacteria, development of detection methods, and control of the disease and the psyllid.  To date, control of the disease is based on planting HLB-free citrus germplasm, eradication of infected citrus plants, and control of the vector with systemic insecticides.  Countries with HLB learn to manage the disease so that they can still produce citrus.  In California, the best strategy is to keep this disease out. This goal is supported by both federal and state quarantine regulations and the University of California's Citrus Clonal Protection Program, which provides a mechanism for the safe introduction of citrus germplasm into California.

For the most current updates on Huanglongbing (HLB) and Asian Citrus Psyllid (ACP), visit the CISR blog.

KPCC The Madeleine Brand Show: California's Citrus Trees Could be in Trouble
NPR: California Valley Guards Against Citrus Disease
The California Report: Infected LA lemon tree could be first of many

Save Our Citrus  (free)
[iPhone] Are you worried that your orange tree looks sick? Are your citrus fruits misshapen or discolored? Think your citrus trees might have a disease? Send a photo with this free app and help save our citrus.