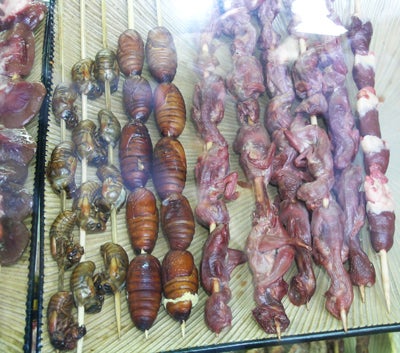 Entomophagy is the technical term for eating insects. Humans have harvested the eggs, larvae, pupae and adults of certain insect species from forests or other suitable habitats to eat for thousands of years. This practice is still common in many tropical countries where certain insect species grow to large sizes, and they are abundant and relatively easy to harvest year round. Insects as food are an excellent source of proteins, vitamins, fats, and essential minerals. There is a strong case in favor of mass rearing insects for food as this practice is probably less environmentally damaging than other forms of protein production. For example clearing tropical rain forests and farming cattle for meat is highly damaging. In comparison to cattle, insects are five times more efficient at converting food into edible tissue, and when considering this together with their high reproductive rates and quick developmental times, the food conversion efficiency of insects maybe 20 times that of cattle!

However, a major shortcoming with the idea of mass producing insect species for food is a fundamental lack of knowledge on how to sustainably farm insects, which species would be best suited for this practice and would be commercially viable because due to pre-existing markets. Despite this, there are some “insect farms” in Thailand where the red palm weevil, Rhynchophorus ferrugineus (Coleoptera: Curculionidae) is farmed and the large grubs (larvae) are sold as food. Watch this very interesting news clip from Thailand (it is in Thai but this does not matter as it is highly visual and very entertaining) to see how these weevils are farmed. 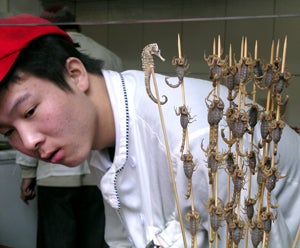 Promoting insects as food and the subsequent development of profitable markets maybe a very good way to enhance the conservation value of natural areas from which insects can either be harvested sustainable or artificially mass reared by manipulating the habitat in a benign manner. However, entomophagy is highly unlikely to become common in developed western cultures, because there has not been a strong cultural or culinary history associated with insect eating (and in many of these countries [e.g., subarctic areas] there may be a lack of large and abundant insects available for regular harvesting and eating hence this habit did not develop).

However, many westerners unwittingly eat insects or insect parts every day without knowing about it!! It has been estimated that the average American eats about two pounds of dead insects and insect parts a year. These bugs are in vegetables, rice, beer, pasta, spinach and broccoli. The US Food and Drug Administration has allowable insect parts per certain food types. For example, beer which is made from hops, can contain up to 2,500 aphids per 10 grams of hops!!! (source “The Week”vol 13 issue 622 [21 June 2013] page 18).

In tropical areas, such as Asia, people harvest insects for food not so much because they are cheap, or it is an environmentally-friendly way of gathering protein, rather insects are consumed because they taste good, either raw (see here for video on eating weevil larvae from sago palm logs), or prepared according to traditional recipes.

The Food and Agriculture Organization of the United Nations has produced two really excellent documents on entomophagy: (1) “Edible Forest Insects: Humans Bite Back!!” and (2) “Edible Insects: Future Prospects for Food and Feed Security.” So next time you are traveling abroad and you are wandering through markets selling insects for food, go ahead, try them, you may be surprised at how tasty they are!!

Before conducting this survey, little did I know of such a variety of insects that are palatable. A number of insects are taken as food since prehistoric time. In Sabah, more than 50 species of edible insects were recorded. Unlike our neighbouring country, Thailand, entomophagy is not a common practice in Malaysia. Many of the rural and elderly local communities in Sabah, however, have experienced eating insects of some form. It is seldom taken now, due to modernization and urbanization. Hence, documentation is important, as such knowledge may slip into oblivion. The local terms used here are mainly in Kadazandusun but may vary in different districts in Sabah. This research project was funded by the Sabah State Government through the Sabah Forestry Department and the Federal Ministry of Science, Technology & Innovation through IRPA.

Larvae of the weevil, Rhynchophorus ferrugineus which were collected from the sago palms. Can be eaten raw, stir-fried or cooked in porridge.

Like honey, the cultivated honeybee brood is considered nutritious by the local people.

Often seen nesting high up on the majestic ‘Mengaris’ tree, the wild honeybee brood is quite popular besides the sago grub.

The ants are ground, mixed with chilli and salt, and served as condiments. The ant brood is eaten raw or cooked in porridge.

Grasshoppers are much sought after as food, particularly by planters who work in the paddy field. They are usually collected when slashing or weeding the field for paddy planting.

They are normally boiled with a bit of water and simmered until dry. Sometimes, they are stir-fried while the bigger ones are deep-fried.

Taken the same way as grasshoppers. They are normally boiled with a bit of water and simmered until dry. Sometimes, they are stir-fried while the bigger ones are deep-fried.

Mole cricket is often collected when ploughing the field before paddy planting.

Bush crickets are attracted to light at night. They can also be collected using torchlight, locating the sound produced by the male bush cricket...

Cicadas are often grilled, with their wings removed. They can also be stir-fried with a pinch of salt, but without oil.

This bug is a serious pest of paddy, attacking the milk stage of the grains. Some of the elderly local people take them as condiments, which is also a way to reduce pest population.

The pungent and foul-smelling fluid emitted by the bug would frighten us off, but the elderly villagers would mash the bugs with chilli and salt, and cook them in hollow bamboo stem.

The moth bugs of the family Flatidae are eaten by some Kadazandusuns at the foothill of Mount Kinabalu. They are usually stir-fried without oil.

Termites can be eaten raw as they have soft body. Other methods are stir-frying without oil or cooking in porridge or rice.

Adult beetles are usually grilled or roasted, with the hard and spiny parts removed before eating. The unsavoury guts are also removed.

Praying mantis is often grilled over an open fire. Sometimes, the ootheca of the insect is consumed as well.

One of the common stick insects taken as food is Haaniella echinata, which is endemic to Borneo. The female looks fleshy. It is harmless despite its ferocious appearance.

Some adults of the larger moths of Sphingidae are consumed in the interior. After removing their wings, they are boiled until dry.

Various species of adult dragonflies are eaten. They are usually salted lightly and boiled, with their wings removed.