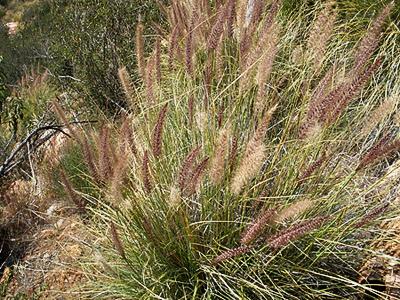 The Situation: African fountain grass, Pennisetum setaceum (Forssk) Chiov., is invasive outside its native range in Northern Africa and has been damaging native ecosystems in Hawaii. It is now an increasingly problematic weed in California. As a common landscape ornamental, it is now widely planted in southwestern states. Fountain grass seeds may disperse readily from existing populations via wind, animals, and automobiles. Repeated introductions through landscape plantings are important in the spread of other invasive plants in California, and are likely important in range expansion of fountain grass. It is a state-listed noxious weed in Hawaii, and has been listed as a Moderate threat by the California Invasive Plant Council.

Damage: The impacts of fountain grass on natural habitats in California are unknown and are currently under research by University of California Riverside scientists. However, in Hawaii it has been shown that fountain grass alters fire cycles and microhabitats. After invasion, due to increased fire and other effects, fountain grass may cause a forest community to be converted into grassland. For example, fountain grass can form single-species stands that promote the spread of fire. After fire, it has shown the ability to rapidly colonize burned areas and prevent other plants from establishing. Native communities like coastal sage scrub in southern California have already been impacted extensively by the combined effects of changes in fire cycle as well as invasion by exotic grasses. Computer modeling has indicated that areas that support coastal sage scrub, grassland, and desert habitats have climates that are potentially suitable for establishment of fountain grass. 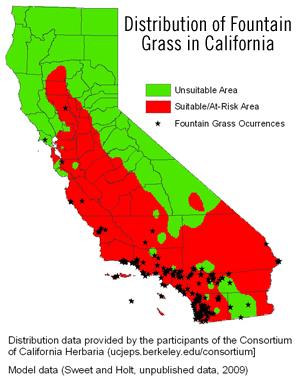 Economic Impact: Unknown. Potential losses due to increased community flammability and fire-carrying characteristics could be in the millions of dollars ($US).

Distribution: From the native range in Northern Africa (Sudan, Ethiopia, Egypt), fountain grass has spread to Australia, New Zealand, Micronesia, Hawaii and the mainland USA All southwestern states in the USA have naturalized populations of fountain grass. Early herbarium records in California show introduction of fountain grass to the Los Angeles area sometime before 1917. It now occurs in 11 counties in California. Fountain grass is commonly seen on California roadsides and road cuts and it is now increasingly seen occurring in large stands on southwest-facing hillsides and rocky outcrops in coastal sage scrub, chaparral edges, and desert slopes and washes. Cultivars of fountain grass that are presumed sterile are commonly used in landscape plantings, as well.

Research: Researchers at the University of California, Riverside are looking at the potential distribution of fountain grass in California, conducting research to predict corridors for spread, and evaluating the potential impacts of fountain grass on native species (such as out-competing native species for light and water) in coastal sage scrub and the desert. This research has been funded by the Shipley-Skinner Riverside County Endowment (http://ccb.ucr.edu/shipley.html), and the Community Foundation (http://www.thecommunityfoundation.net/home/index.html). Research results will be used to develop recommendations for management based on the risk of fountain grass invasion in southern California.