The Situation: The Argentine ant is native to Northern Argentina and it is a globally distributed invasive pest in urban, natural, and agricultural habitats. Due to unusually low levels of intraspecific aggression the Argentine ant can establish extremely large colonies. This contributes to its status as a nuisance pest in homes and its ability to spread rapidly. Other negative effects of this invader include facilitation of plant feeding pest insects (e.g., honeydew producing insects) and disruption of native ants, pollinators, and even vertebrates. The Argentine ant was first recorded in California in 1907 and since then has become widely distributed in coastal and southern portions of the state.

The Damage: Because it does not sting or bite humans the Argentine ant is not a direct threat to humans, unlike the red imported fire ant (Solenopsis invicta). Instead, the Argentine ant is most notable as a nuisance pest in urban areas, especially because of the availability of water. This ant exists in back yards at high densities associated with landscape features that provide favorable microclimates, such as potted plants and walkway bricks or stones. They enter homes through cracks and other spaces, in search of food or water.tine ant can establish extremely large colonies. This contributes to its status as a nuisance pest in homes and its ability to spread rapidly. Other negative effects of this invader include facilitation of plant feeding pest insects (e.g., honeydew producing insects) and disruption of native ants, pollinators, and even vertebrates. The Argentine ant was first recorded in California in 1907 and since then has become widely distributed in coastal and southern portions of the state.

Argentine ants are also an economic threat because of their potential to tend plant pest insects, such as mealybugs, scales, and aphids. In return for sweet honeydew secretions from these plant feeding insects, ants provide protection from natural enemies. Argentine ants may even move pests to better food sources or more favorable microclimates to maximize honeydew production. This mutualism can compromise management of pest insects by otherwise effective natural enemies, through removal or intimidation of predators and parasitoid wasps, leading to higher pest densities and greater plant damage than would occur in the absence of Argentine ants. For example, parasitism rates of an important citrus pest, the California red scale (Aonidiella aurantii), were reduced two- to five-fold in the presence of Argentine ants.In addition to being a nuisance in urban settings, the Argentine ant is problematic in both natural and agricultural ecosystems. Argentine ants live cooperatively in large colonies consisting of several nests and queens covering a large area. This arrangement is possible because of unusually low levels of intraspecific aggression, which facilitates high population densities. As a consequence, Argentine ants can outnumber and compete effectively with other insects when foraging for food and habitat. Argentine ant presence can displace native ants and severely disrupt natural food webs. For example, in southern California, declining coast horned lizard (Phrynosoma coronatum) populations have been attributed, in part, to the displacement of its preferred prey, the native California harvester ant (Pogonomyrmex californicus), by the Argentine ant.

Control: There are no known specific enemies of the Argentine ant. Therefore control is primarily via chemical and cultural means. Broadcast spraying of insecticides is of limited value because a substantial portion of Argentine ant colonies exist below ground where insecticides are unable to penetrate. Poison bait stations have proven effective at controlling Argentine ants in vineyards, though prolonged deployment may be required for natural enemy-mediated reductions on honeydew producing pests to become apparent. Control in homes and yards includes sanitation (e.g. removal of food scraps), closing points of entry to homes, and removing landscaping features that promote favorable microclimates - especially excess water sources. 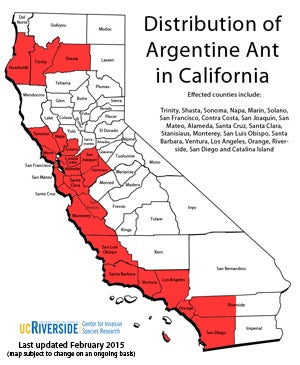 Distribution: Originating from Northern Argentina near the Paraná River and surrounding regions, the Argentine ant now occurs in most regions with Mediterranean climates or with mild winters and moderate to high humidity. Argentine ants are established in at least 15 countries on six continents and many oceanic islands, including New Zealand, Japan, and Hawaii. The global distribution of Argentine ants continues to expand. Humans have been the primary factor in their spread, however, this ant can also disperse into new areas without human influence. The Argentine ant is widely distributed in California, with highest abundance in coastal areas, along rivers, and in urban settings.

Research: Several researchers at University of California campuses are investigating Argentine ant biology and control. A major focus of Argentine ant research is on how population genetics influences invasion success, and the ensuing genetic and behavioral changes that occur following invasion. Other researchers are studying the impacts of Argentine ant establishment for control of agricultural pests in citrus and grapevines. Finally, there is ongoing research into the implementation of chemical control programs and insecticide resistance in both agricultural and urban environments.