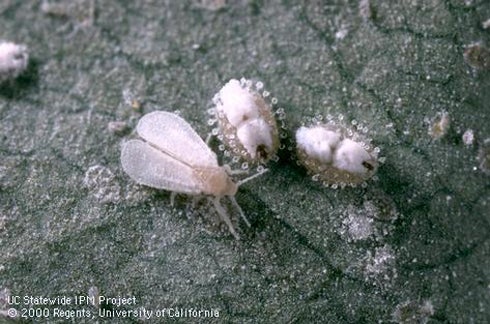 The Situation: Ash whitefly represents an outstanding biological control success in California. Ash whitefly was first introduced into California in the late 1980s and was a significant pest of fruit and shade trees such as ash, pear and pomegranate. In the absence of natural enemies, ash whitefly populations exploded out of control. The pest originated and occurs widely in the Middle East and Mediterranean and was accidentally introduced into California via infested plant material. The University of California, Riverside's Department of Entomology has provided aid in controlling this pest in areas in which ash whitefly has subsequently invaded.

Damage: Ash whitefly infests 40 species of plants in California. Left unchecked, its numbers rise to substantial levels within a wide variety of host plants. Feeding by adult and young whiteflies extracts plant nutrients, resulting in defoliation of trees, loss of fruit and, in severe cases, death of the host tree. Severe impact on outdoor activities in urban areas was caused by the enormous numbers of flying whitefly adults. Honeydew build-up on exposed surfaces also resulted in ruined paint on cars parked beneath shade trees along city streets.

Economic Impact: The economic impact of the ash whitefly has been estimated in the millions of dollars, most severely impacting the shade and fruit tree nursery industry and commercial pomegranate orchards. Since the biological control program of the ash whitefly established widespread control with the use of a small parasitic wasp, Encarsia inaron (Hymenoptera: Aphelinidae), there have been no reports of economic damage and this pest no longer poses an economic threat to California. One year after E. inaron releases began in 1992, parasitism of ash whitefly nymphs averaged between 63 and 97%. Based on the economic value of preserving healthy ornamental/evergreen pear and ash trees, the ash whitefly biocontrol effort provided $219,822,823 and $298,803,970 in esthetic benefits to California in wholesale and retail replacement values, respectively. For every dollar spent by the State Biological Control Program and the University of California, approximately $181 in wholesale and $245 in retail esthetic value for the primary hosts of the ash whitefly were preserved. 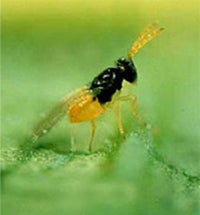 Distribution: The ash whitefly occurs in low densities throughout California except in mountainous areas where temperatures are too low for its survival. The range of this pest has extended into other states in the U.S. and around the world (e.g., New Zealand, Mexico, and Argentina) and complete biological control has been achieved in these invaded areas.

Research: The University of California, Riverside's Department of Entomology and the California Department of Food & Agriculture developed a biological control program which involved scientists exploring for natural enemies in the pest's area of origin in the Middle East and Mediterranean. Several candidate species were shipped where they were tested for efficacy against the ash whitefly. One candidate, Encarsia inaron, shipped to the University of California, Riverside's federal quarantine facility was cleared for release in areas of ash whitefly infestation in California and was soon responsible for the dramatic crash of local ash whitefly populations. This tiny parasite is still keeping the ash whitefly under strict control in all areas of California.