The Situation: An exotic long-horned beetle was first discovered attacking ornamental trees in New York City and Chicago. Detections of this pest have since been made in most states in the northeastern portion of the United States as well as in California beginning in 1996. Their route of entry into the USA appears to have been in untreated wooden packing crates originating in China. The Asian Long-Horned Beetle (ALB) is native to Asia, where it kills many species of trees, including poplars, maples, elms and mulberries. These beetles are large, conspicuous insects, readily recognized by their horns or antennae. 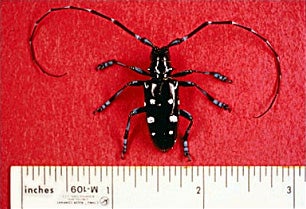 Damage: Oviposition cavities chewed out by females are found in tree trunk bark and branch junctions, or on the trunk itself. As larvae mature, they enter the heartwood of the tree, destroying the quality of the wood, while feeding by large numbers of beetle larvae can kill trees by girdling them. Adult beetles emerge in the summer through 3/8" diameter holes in the bark. Sap flows heavily from these large wounds and infested trees are prone to secondary attack by other diseases and insects. This beetle adversely affects the human environment by killing valuable shade and park trees, as well as injuring or even killing forest trees of economic value (e.g., sugar maples in the northeast USA). Structural weakening of trees by tunneling larvae also poses a physical danger to pedestrians and vehicles from falling limbs or trees during wind and/or ice storms.

Economic Impact: The primary impact of ALB has been on street trees in several infected sites. These trees require removal, treatment to destroy all life stages present (e.g., chipping), and replacement, at a cost of several hundred dollars per infestation. If this pest enters a forest ecosystem, the economic impact could be far greater than eradication and containment costs and could adversely impact export markets for various hardwood products such as veneers. For California, the damage to street and park trees could be immense if this pest becomes established in urban areas. California forests could also be severely impacted if this pest were introduced as many native tree species are likely to be vulnerable to attack.

Distribution: This beetle is widely distributed in China, Japan and Korea. It causes severe damage from 21-43½ north latitude and 100-127½ east longitude, especially in wooded populations. In the USA the beetle is well known in the states of New York, New Jersey, and Illinois. In Canada the beetle attacks trees in Toronto and Ontario. However, this beetle has been intercepted widely at warehouse and ports all over the USA and it is likely to continue its continental spread. 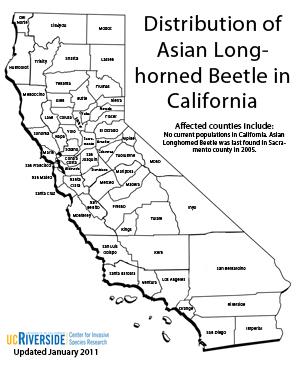 Research: Much of the research on this pest has been done outside of the U.S. by scientists in countries that have been experiencing the effects of this pest for a quite a long period of time. Studies on other species of borer beetles could prove useful in dealing with this pest. There has been some research done on the effect of natural enemies, including entomopathogenic nematodes, which could become effective biological control agents of this insect. Studies have also been conducted to find more resistant species of trees that could be used as replacements for infected trees. Improved quarantine methods are needed to halt the immigration of this pest into uninfested areas of the United States (e.g., California).

Research: Much of the research on this pest has been done outside of the U.S. by scientists in countries where ALB is native (e.g., China). Cooperative studies between Chinese scientists and USDA-ARS researchers are ongoing and are focusing in part on finding biological control agents. There has been research on the effect of several kinds of natural enemies on ALB larvae and adults, including entomopathogenic nematodes and fungi, which could be effective biological control agents of this insect if environmental conditions are appropriate. Foreign exploration for parasitoids that attack eggs and larvae of ALB are being conducted in China. Studies have also been conducted to find more resistant species of trees that could be used as replacements for susceptible tree species in urban environments. Improved quarantine methods are needed to halt the accidental movement of this invasive pest into uninfested areas of the United States (e.g., California).

More Media on the the Asian Long-Horned Beetle