The Situation:The Asian Woolly Hackberry aphid Shivaphis celti was first detected in North America on native hackberry trees (Celtis occidentalis) in Georgia in 1996 and has been subsequently found throughout the southeastern states. In 2002 the aphid was detected in several counties in the San Joaquin Valley of California on the commonly planted Chinese (Japanese) hackberry (Celtis sinensis Pers.). It is not known if the aphids were introduced to California from the Southeast, or if this represents a new introduction from China where the aphid originates. 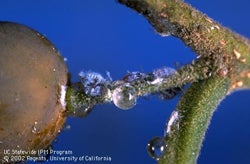 Damage: The aphid appears to be restricted to hackberry trees (Celtis spp.). This aphid is a pest because it produces copious amounts of honeydew which creates a sticky mess and promotes the growth of blackish sooty mold on surfaces beneath infested trees. This honeydew makes it an intolerable pest in residential and business districts where the tree is widely used to shade parking lots and walkways. Honeydew production has been documented at double previously developed tolerance thresholds. In the San Joaquin Valley, populations have usually been highest in the spring and fall months with lower numbers occurring through the summer. No long-term or serious damage to hackberry trees has been found after several years of infestations by this aphid.

Economic Impact:Numerous complaints from businesses and homeowners have caused several municipalities to place the hackberry on their "no-plant" lists. This is unfortunate because the Chinese hackberry is a well-adapted shade tree in the Central Valley and composes up to 10% of some urban forests in the area. Some municipalities have been treating all hackberry trees in parks and parkway strips with systemic applications of imidacloprid, which is an effective, but relatively expensive insecticide.

Distribution:The aphid is originally from Asia; however since its introduction to the US it has been documented in South Carolina, Georgia, Florida, Alabama, Tennessee and Texas. In California the aphid appears to be throughout the state wherever hackberries are planted.

Research:Researchers at California State University, Fresno and the University of California have developed techniques to monitor for the aphid as well as control strategies. Systemic applications of imidacloprid provide season long control and can be applied during the growing season after populations have been confirmed by monitoring. Researchers are currently investigating biological control for the aphid as a long term sustainable solution for managing populations. Collections of parasitoids have been made in China and cooperators there are sending additional shipments to quarantine facilities in Berkeley for further research in the US.

More Media on the the Asain Woolly Hackberry Aphid