The Situation: Eucalyptus is a ubiquitous landscape, shade, and windbreak tree throughout southern and central California. The trees are valued for their fast growth and tolerance of poor soils and drought. Eucalyptus is now threatened by several pest insects accidentally introduced into California from Australia, one of which is the Australian gum tree weevil.

Description: Adults are robust, red-brown beetles, about 7-9 mm in length. Adults live 3-6 months, with females typically laying 600-800 eggs during their lifetime. Eggs are laid inside dark-colored egg cases, each containing 6-12 eggs. Egg cases are attached to the upper surfaces of new foliage, where they are readily visible as dark pellets. The larvae are legless, yellow-green, and slug-like, with dark stripes down the sides. They are characterized by a coating of slime and chains of black fecal pellets, which frequently adhere to the larvae. 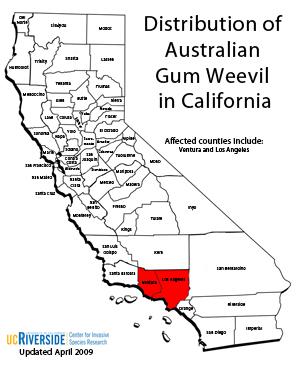 Distribution: The Australian gum tree weevil first appeared in California in the spring of 1994, as a localized infestation in Ventura County. The beetle has since spread throughout Ventura and Los Angeles counties.Damage and Economic Impact: Both larval and adult snout beetles consume eucalyptus foliage, particularly new shoots and leaves. Adult feeding damage is characterized by notching of the leaves, giving them a scalloped appearance. Young larvae score trenches in the leaf surfaces, while older larvae consume the entire leaf. Trees are rapidly defoliated by feeding weevils and can be killed by repeated defoliation. Snout beetle populations can build to high levels in a matter of months, so that entire windbreaks and groves can be quickly stripped of foliage and eventually killed. Area-wide control of the snout beetle with insecticides is not feasible because of the problems associated with pesticide coverage of large trees spread over significant areas. Pesticide use is especially problematic in residential areas.

Research: Researchers at the University of California, Riverside imported a parasitic wasp from Australia, which attacks and kills snout beetle eggs. This tiny parasite, Anaphes nitens, has been used to great effect in many other countries to control the snout beetle. In the areas of California where the parasite has been released, it has rapidly reduced snout beetle populations to insignificant levels, and Eucalyptus groves in those areas are recovering rapidly. The parasite and beetle overlap in distribution, and the beetle is under complete biological control.

Text provided by Timothy Paine and updated by Mark Hoddle
Photos courtesy of the USDA Forest Service and Michael Smith and Invasive.org