The Situation: The bagrada bug (also called painted bug) first was found in June 2008 in Los Angeles, Co. California. Some sources refer to B. hilaris as the harlequin bug, but this is the official common name for another insect, Murgantia histrionica. This insect quickly became established throughout the southern half of California, and spread to several other states causing widespread damage through 2015. Management practices and biological control have contributed to a reduction in the frequency of devastating infestations in agricultural fields.

Damage: Bagrada bug can be a major pest of crop plants in the Brassicaceae (Cruciferae), which includes important foods like cabbage, kale, turnip, cauliflower, mustard, broccoli, and radish. The bagrada bug also has been recorded attacking papaya, potato, maize, sorghum, cotton, capers, and some legumes. Damage is inflicted on host plants when adults and nymphs insert their needle-like mouth parts and remove plant sap just under the epidermal surface. Feeding results in a characteristic star-shaped feeding mark on the leaf or fruit. They can suck so much sap from the plant that severe infestations can kill young plants. Feeding on more established can result in newly formed central shoots or heads becoming stunted. Populations can build up quickly reaching damaging densities that require control. Heaviest infestations are typically observed in organic farms, community gardens, and residential vegetable gardens were little or no pesticides are used. Local residents, not familiar with this new stinkbug, often think they have beneficial lady beetles, because bagrada adults and larger nymphs are about same the size and coloration as lady beetles. 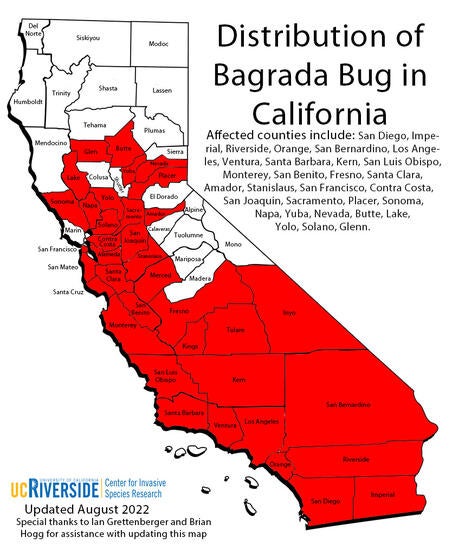 Identification: Adult bagrada bugs are 5-7 mm long, and have black, shield-shaped bodies with distinctive white and orange markings. Adult females are larger than males. Nymphs are wingless and molt through 5 instars or developmental stages. First instar bagrada bugs have reddish-brown heads and thoraxes and bright red abdomens. Later instars become darker (adding black color to their body) and develop wing pads. After the 5th instar, the adult bagrada bug emerges with fully functional wings. Females lay eggs in the soil beneath host plants and on leaves. The eggs are oval, creamy-white, and turn orange as they age. Usually all life stages are present together on plants and adults are commonly observed in copulation.

Distribution: Bagrada bug is native to Africa, Asia, and the Middle East and it is found throughout much of Africa, India, and southern Europe. . In the USA, bagrada bug has established throughout most of California (see map), and in parts of Arizona, Hawaii, Nevada, New Mexico, Texas, and Utah. It also is established in 6 states of northern Mexico, and in Chile and Argentina in South America.

Research: There has been substantial research into the biology, ecology, and management of bagrada bug. Management strategies include insecticides, cultural control, and biological control. Presently, there are at least 9 parasitoid species that have been recovered from B. hilaris eggs in the field. There also are two ant species and a collembolan that are known to feed on bagrada bug eggs in the soil.

More Media on the the Bagrada Bug