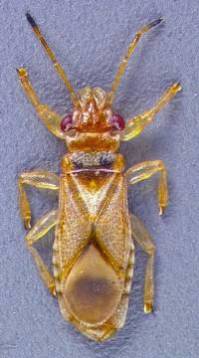 Field Identification: Adults (2.0-3.0 mm long) have orange/light brown flattened bodies with some dark brown areas. Eyes are red, bulging and pedicellate. Mandibular plates are strongly produced anteriorly. Tibiae with a unique lobate appendix (a structure enhancing their grasping ability to the substrate). Antennae are light brown with black tips.
Nymphs have tan to orange colored bodies with brown spots on their thoraxes and some abdominal segments. Eyes and the areas around dorsal abdominal scent glands are red. Eggs (about 0.5 mm long) are black, oval and flattened. They are usually deposited singularly or in clusters on the leaves and some smaller branches.

The foliage on affected trees may display leaf pitting, silvering and large areas of tan colored necrotic tissue. Heavily infested leaves often turn reddish-brown (bronzing) which can lead to defoliation and subsequent branch dieback. In some infestation sites extensive canopy thinning and tree mortality was recorded.
Bronze bug populations can build up quickly reaching pest proportions and may rapidly spread to nearby areas.