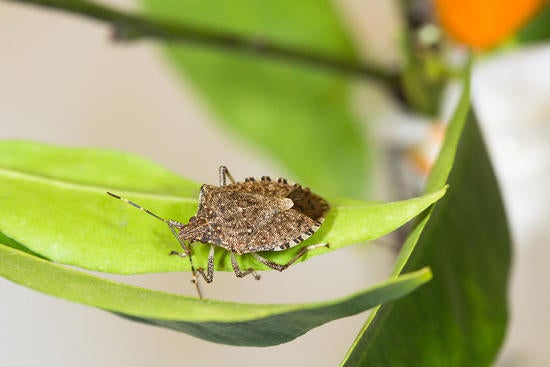 The situation: The brown marmorated stink bug is a highly polyphagous insect that is native to Eastern Asia. The pest status of this insect stems from feeding damage caused on a wide range of vegetable crops, fruit trees, and ornamentals. Moreover, it is considered a nuisance pest due to its propensity for migrating seasonally into homes where large numbers aggregate to seek favorable overwintering sites. Within the last 15 years this stink bug has established and spread throughout the Mid-Atlantic States of the US and is now found in portions of the Western U.S. Although no reports of damage associated with this invasive insect have occurred in California it should be considered a significant risk. Management is limited currently to chemical control of agricultural crops and preventative measures by homeowners to restrict entry into houses during the winter.

Description: Brown marmorated stink bug typically has two generations per year, beginning with adults laying a cluster of small faint green eggs on the underside of leaves. As with other stink bugs, after hatching these developing juveniles pass through five nymphal instars, which show a progressive darkening from yellow-red to brown and eventually black coloration. Adult brown marmorated stink bugs resemble native stinkbug species, with typical “shield” shaped bodies approximately 15mm in length that are mottled brown, but with abdominal edges and antennae that have alternating light and dark bands.

Damage: Brown marmorated stink bug is notable for having a wide host range, purportedly upwards of 60 plant species, including numerous vegetable crops, fruit trees, and ornamental plant species. Among the most significant crop plants at risk in California are tomato, pepper, grapevines, apple, pear, and citrus. As with other stink bugs, both nymphs and adults use piercing-sucking mouthparts to feed on leaf and fruit tissue. This feeding, specifically the injection of digestive enzymes to facilitate nutrient extraction, results in localized necrotic spots. Damage is particularly problematic for direct feeding on developing fruit, which can lead to severe distortion and in some cases fruit drop. Stink bugs can also act as contaminants, such as in grapevine clusters, which fouls juice once infested clusters are pressed and the bugs are crushed.

In addition to plant damage, brown marmorated stink bug is considered a significant nuisance pest because of its tendency to use homes as overwintering sites. Adults abandon orchards in the Fall, frequently moving into nearby artificial structures for shelter. These seasonal migrations can lead to dramatic infestations within homes. Although stink bugs are not a direct threat to humans, if disturbed the insects will release a strong, unpleasant odor, hence their common name, stink bug. 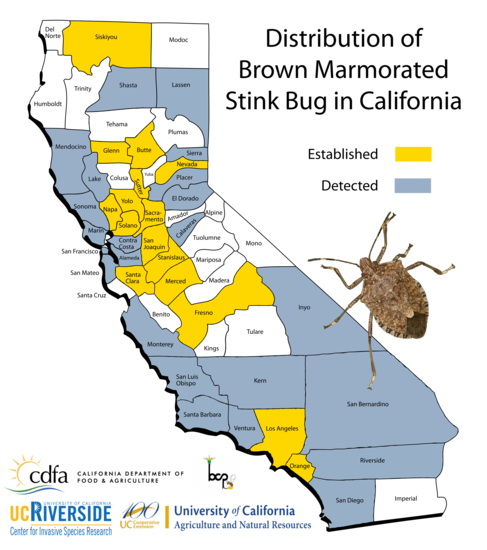 Distribution: The brown marmorated stink bug is native to Eastern Asia, including China, Japan, and Taiwan. The first documentation of this species in the United States occurred in Pennsylvania in 2001, although it is likely to have established as early as 1996. Since then this invasive insect has spread throughout Pennsylvania, it is believed to be established currently in at least 15 states, and it has been found occasionally in more than a dozen additional states.

The brown marmorated stink bug was first found in the Western U. S. in Oregon in 2004. It is now established reportedly in the region surrounding Portland, including a portion of Southern Washington. This insect has been trapped in California, in Solano County in 2005 and multiple times since then in parts of Southern California (e.g., Pasadena). Despite these finds it remains unclear whether the brown marmorated stink bug has formally established in California and, if so, what is its distribution.

Control: Management options for this invasive insect are currently limited. In an agricultural setting management relies on chemical control. Brown marmorated stink bug has been shown to be susceptible to several widely used insecticides, though further trials are needed that evaluate the efficacy of chemical control in the field. Research to identify a viable biological control agent is ongoing. Parasitoid wasps, especially those that attack the eggs and are effective in the stink bug’s native range may be problematic in the Western U.S. because of their potential to attack native stink bugs.

In a backyard setting the primary recommendation for homeowners is to seal off any access points that the insect may use to gain entry into the home. Chemical control inside of homes is discouraged.

The New Yorker: When 26,000 Stinkbugs invade your home
Executive Order: President Obama issues EO to Protect the US from Invasive Species
Science Magazine: Scientist spent years on a plan to import this wasp...

Interactive Lecture (1 hour): Includes a lecture by Tracy Leskey on the "Sudden Emergence of Brown Marmorated Stink Bug as a Serious Agricultural Pest in the Mid-Atlantic. Presentation includes, video and slides presented in chapter form.

BBC: Stink bugs: The scientific battle against an insect invasion