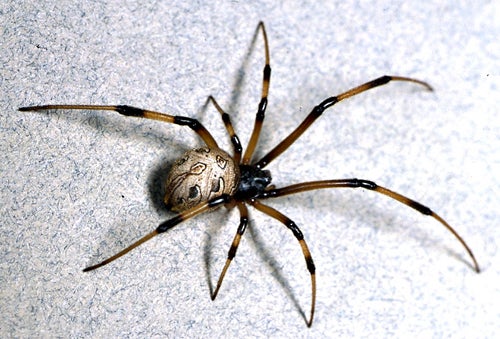 The brown widow is suspected to have evolved in Africa although it was first described from South America, which adds confusion as to where it might have originated.  The Brown Widow Spider is a cosmopolitan tropical and subtropical spider having established populations in Hawaii, Florida, some Caribbean Islands, parts of Australia, South Africa, Japan, and Cyprus.  In North America, the Brown Widow Spider was restricted for many decades to the Florida peninsula.  However, around the year 2000, it started showing up in other Gulf Coast states.  Brown widows are now known from Texas to Georgia and South Carolina.  As specimens were found in new locations in the southeastern United States, this species was simultaneously being collected with greater frequency in southern California.  The first specimens were collected in Torrance in 2003.  After that, the spider was found with greater frequency in Los Angeles, Orange and San Diego counties.

Description of the Brown Widow: Unlike its starkly black-and-red colored relative, the black widow, the coloration of a brown widow consists of a mottling of tan and brown with black accent marking.  In mature females, there is usually a dorsal longitudinal abdominal stripe and three diagonal stripes on each flank.  At the top of each diagonal stripe, there is a black mark, which is rather conspicuous and square-ish.  The Brown Widow Spider does have an hourglass but it is typically an orange shade rather than the vivid red of a black widow. The brown widow looks similar to immatures of the western black widow spider, the latter of which has smaller black spots on the top of the diagonal abdominal stripes and more olive grey background coloration.  Being able to discern brown widows from immature black widows is therefore difficult and requires some experience.  However, a more diagnostic feature of a brown widow is its egg sac.  Most spider egg sacs that are free (i.e., are not attached to flat surfaces) look like a lemon drop candy or a little cotton ball with indistinct edges.  The egg sac of a brown widow has multiple silk spicules projecting out from the surface.  The egg sac has been described as looking like a large pollen grain or a World War II harbor mine designed to blow up ships.  The egg sac of the Brown Widow Spider is so distinctive that it is readily recognizable.

Reproduction: Brown widows are prolific breeders in that they can produce many egg sacs in a lifetime, often several in quick sequence.  They lay about 120-150 eggs per sac and can make 20 egg sacs over a lifetime.  In comparison, the larger western black widow spiders lay about 300 eggs per sac but make 10 or so egg sacs before they die.

Habitat Preferences: The brown widow builds its web in secluded, protected sites around homes and in woody vegetation with branches.  Some typical sites selected by brown widows for web building are empty containers such as buckets and nursery pots, mail boxes, entry way corners, under eaves, storage closets and garages, recessed hand grips of plastic garbage cans, undercarriages of motor vehicles that are stationary for long periods, and the undersides of outdoor furniture and wrought iron railings. They choose places that are more exposed than sites chosen by black widows and hence, appear to be at higher risk for interactions with humans as for as bites are concerned. 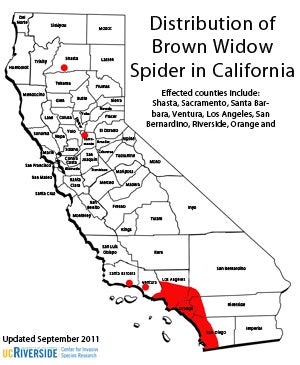 Spider Bites: The bite of a brown widow spider is minor in comparison to that of a black widow.  Although one frequently cited study demonstrates that, drop per drop, brown widow spider venom is as toxic as other widow species, venom toxicity is only one aspect when considering a spider's bite potential. An African study with 15 verified bites demonstrated that the brown widow spider bite victims showed none of the classic symptoms of latrodectism, a response induced by neurotoxins in the venom of spiders in the genus Latrodectus (e.g., brown widows, black widows [L. mactans], Australian redbacks [L. hasselti], European black widow [L. tredecimguttatus], and New Zealand's katipo spider [L. katipo]).  The reason for the weaker effect of brown widow bites on humans is possibly because the brown widow does not have or cannot inject as much venom as its larger relatives.  The two major symptoms of a brown widow bite were that the bite hurt when it was inflicted and it left a red mark. These two symptoms are not much different from the bite of normal household spiders.  However, there is one recent report of a verified brown widow bite manifesting in more severe symptoms that required hospitalization of the bite victim.

Brown widows appear to be occupying the same niche as black widows so therefore, there may be a shift in the species composition. Considering that the brown widow is less dangerous and may be supplanting the native western black widow from habitats, it is conceivable that the risk of serious injury from overall spider bite may decrease in southern California as the brown widow spreads.

Control of Brown Widows: There is no specific information regarding the control of brown widows by insecticides. Most current advice is what is used for controlling spiders in general. Therefore, most commercially available insecticides should work on brown widows. Take care to spray up into holes and crevices. Reducing clutter around the house and in the garage should eliminate nest sites for them. Also, one should store garage items in zip closure plastic bags where there might be interactions with spiders. These items include rarely worn garments such as gardening clothes and gloves, recreational items like sports equipment (i.e., baseball gloves, roller skates) and other items where spiders can crawl up into holes where fingers can be inserted.