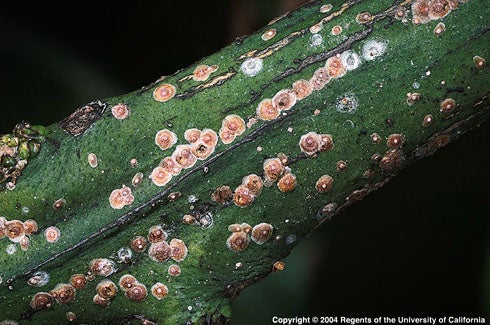 The Situation: California red scale was introduced into California between 1868 and 1875, apparently on citrus seedlings from Australia. The scale insect is native to Southeast Asia but has been transported on citrus seedlings to all arid and semiarid regions of the world where citrus is grown. It occurs in all of California's citrus growing areas. In the absence of pesticide disruption, California red scale is suppressed by introduced natural enemies in the coastal and inland valley groves of southern California. These natural enemies are not completely effective against the scale insect in San Joaquin Valley citrus groves primarily due to extreme climatic conditions and the liberal use of broad-spectrum pesticides. The efficacy of these chemicals is diminishing as California red scale continues to develop resistance to all of the available broad-spectrum pesticides.

Damage: California red scale infests all above-ground parts of a citrus tree. When it is moderately abundant or dense on the fruit, the fruit is reduced in grade or culled in the packinghouse. When the red scale is dense on leaves and wood, it defoliates portions of the tree and either kills all or parts of branches within the tree. 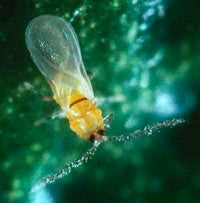 Economic Impact: California red scale control costs about $100 per acre per treatment and with increasing pesticide resistance, some growers are spraying up to three times per year. With approximately 300,000 acres of citrus in the state, the annual cost of control is enormous.

Distribution: California red scale occurs in all of the citrus growing regions of the state, including coastal groves, inland southern California, the San Joaquin Valley, and the low desert including Arizona.

Research: The University of California at Riverside is developing an integrated pest management program that: (1) reduces the use of broad-spectrum pesticide sprays for control of the citrus pest complex and replaces them, as needed, with selective, less disruptive materials; (2) relies on resident natural enemies to suppress most pests; (3) promotes augmentation of commercially produced natural enemies for scale insect control; and (4) uses importations of additional natural enemies from the pest's native home.

Text and provided by Robert F. Luck , updated by Mark Hoddle
Photos courtesy of Regents of University of California