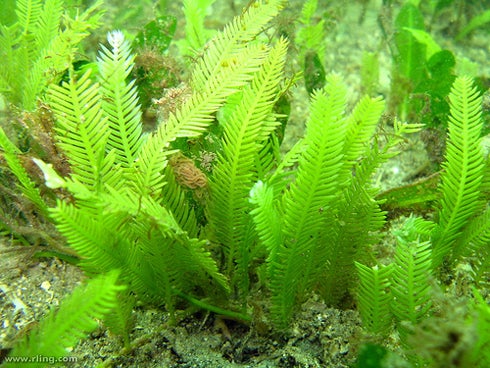 Caulerpa taxifolia is native in tropical waters with populations naturally occurring in the Caribbean, Gulf of Guinea, Red Sea, East African coast, Maldives, Seychelles, northern Indian Ocean, southern China Sea, Japan, Hawai‘i, Fiji, New Caledonia and tropical/sub-tropical Australia. A cold water strain of this attractive tropical alga, possibly developed from plants that initially originated from Australia, was selected for by aquarium managers at the Wilhelma Zoo in Stuttgart, Germany in 1980. By 1984, this coldwater strain of Caulerpa had been released into the Mediterranean Sea by the Oceanographic Museum of Monaco where it established. 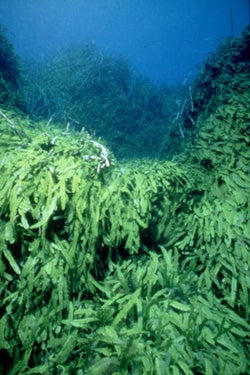 Currently, Caulerpa has colonized thousands of hectares of sea bottom in the Mediterranean and it is found from France to Croatia and its range in the Mediterranean will likely to continue to expand. The invasive strain of Caulerpacan tolerate low sea water temperatures and can survive out of water, in moist conditions, for up to 10 days. This alga can colonize most kinds of substrates including rock, sand, mud, and seagrass beds from depths ranging from less than 1 m to ~12 m.

Caluerpa is capable of rapid growth and reproduction of the invasive strain is asexual and dispersal occurs through fragmentation. Fragments as small as 1 cm give raise to viable plants. Long distance spread occurs via ballast water discharge from transoceanic boats and illegal dumping of aquaria plants. More localized dispersal occurs through the unintentional movement of plant material on boats, anchors, or fishing gear, or via algal fragments being dispersed by sea currents.

The Problem: The invasive strain of Caulerpa in the Mediterranean Sea smothers other algal species, seagrasses and sessile invertebrate communities. It does this by either out-competing species for food and light or due to the toxic effects of caulerpenyne compounds that are contained in its foliage. Large meadows of Caulerpa have vastly reduced native species diversity and fish habitat. Native fish which are able to eat Caulerpa, such as Mediterranean bream, accumulate caulerpenyne toxins in their flesh which makes these fish unsuitable for human consumption.

The appearance of Caluerpa in southern California in 2000 was most probably caused by an aquarium owner improperly dumping the contents of a marine fish tank into a storm water system that fed into Agua Hedionda Lagoon in Carlsbad where this weed was first discovered. California has since passed a law forbidding the possession, sale or transport of Caulerpa taxifolia within the state. There is also a federal law under the Noxious Weed Act forbidding interstate sale and transport of the aquarium strain Caulerpa. 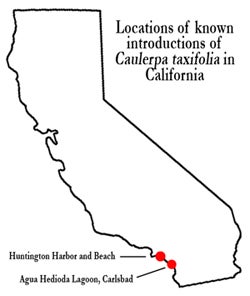 When first detected the populations of Caulerpa in southern California were small enough for eradication to be feasible. To eradicate underwater populations of Caulpera, patches were covered with tarpaulins which were held down with sandbags which sealed the edges. Chlorine was poured under the sealed tarpaulins which trapped the chlorine. Chlorine in this instance acted as a pesticide and killed living organisms trapped under the tarpaulins, including Caulerpa. The unintentional killing of fish, invertebrates, and plants while not desirable was deemed necessary and preferable to letting Caulpera spread unchecked.

Economic Impact: Small infestations found in Agua Hedionda Lagoon in Carlsbad near San Diego and Huntington Beach near Los Angeles, took six years to eradicate at a cost of more than $7 million (US). So far no other infestations of the cold water strain of Caulerpa have been located in the USA. In the Mediterranean commercially important fisheries have been adversely affected because fewer fish live in areas with heavy Caulerpa infestations.