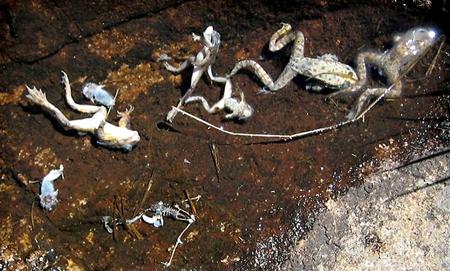 Over 50% of amphibian species have declined globally in response to several threats such as habitat loss, environmental degradation, pollutants, and disease. Recently the fungal pathogens Batrachochytrim dendrobatidis (Bd) and B. salamandrivorans (Bsal) have emerged as major threats to amphibians. While Bd exists in all continents where amphibians occur, Bsal is known in Europe and Asia, where it affects urodeles (salamanders and newts). Here, we focus information on Bd because Bsal has not been reported yet outside its known range in Europe and Asia; however, the risk of introduction of Bsal in the US is high due to international pet trade and high contagiousness of this pathogen.

Amphibians infected with Bd develop chytridiomycosis, a skin disease that eventually causes death in susceptible species. The first documented outbreaks of Bd occurred in the late 1990s simultaneously in Australia and Central America; though, surveys of museum specimens suggest Bd has been in the environment since the early 1900s, if not earlier. Bd has been detected in over 500 amphibian species and has been associated with severe population declines or extinctions in several regions throughout the world. A great deal is still unknown about the biology of this pathogen. It remains an active area of research for disease ecologists and conservation biologists.

Damage: Bd is an external pathogen that attaches to keratinized portions of amphibians, including the mouthparts of tadpoles and the skin of adults. The fungus reproduces via sporangia, and may be spread by movement of flagellated zoospores, direct contact between hosts, or between host stages. Growth of the fungus leads to degradation of the keratin layer, which eventually causes sloughing of skin, lethargy, weight loss, and potentially death. The physiological mechanism for Bd-induced mortality is not completely understand, but it appears to stem from disruption of skin function - such as fluid transport or gas exchange.

Bd is known to infect over 500 species, but susceptibility to disease is highly life stage and species specific. For example, in mountain yellow legged frog (Rana muscosa) tadpoles suffer generally mild sublethal effects, with most mortality occurring at metamorphosis when there is a rapid production of newly keratinized skin tissue. Conversely, several other amphibian species appear to be relatively tolerant or resistent to Bd - including some widespread exotic or invasive species, such as the marine toad (Rhinella marina), American bullfrog (Lithobates catesbeianus), and African clawed frog (Xenopus laevis).

Bd outbreaks have been associated with local and possible species extinctions in all continents, especially during the epizootic phase (i.e. period associated with the introduction and rapid spread of a pathogen in naïve populations). For example, after 2004, Bd prevalence in parts of Panama increased from 0 to nearly 60% over approximately 4 months, with concomitant declines in amphibian density and diversity of over 80% and 60%, respectively. Bd is thought to thrive in cool, moist habitats. This has been used to argue that cooling trends observed in parts of Central America are driving Bd-induced amphibian extinctions in these regions. In many regions in the world, Bd seems to have become endemic (i.e. enzootic phase), showing seasonal oscillations in prevalence among local species and low mortality rates. This pattern may suggest reduced pathogenicity of Bd or rapid evolution of amphibians to local strains of Bd. 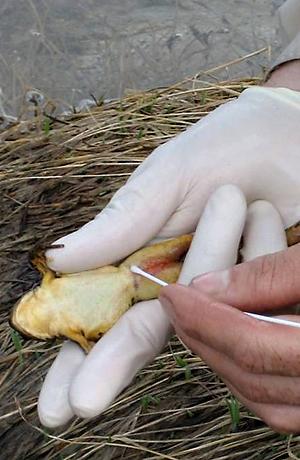 Distribution: One explanation for the emergence of chytridiomycosis in amphibians, the "novel pathogen hypothesis", is that Bd existed historically as a locally distributed pathogen that only recently was spread to new regions. Alternatively, the "endemic pathogen hypothesis" posits that Bd was historically widespread but that recent environmental change (e.g., climate change, pollutants, habitat degradation) altered its pathogenicity. The relative importance of these two mechanisms is currently a source of debate. Low genetic diversity among geographically distant Bd strains is consistent with the first hypothesis, but synchronicity of Bd outbreaks in disparate, intact habitats supports the latter hypothesis. It is also plausible that the explanations are not  mutually exclusive.

Although genetic evidence suggest Bd originated in Asia, the first described outbreaks occurred in 1998 in both Australia and Central America. This finding may support the hypothesis that Bd was spread to other continents in the 1960s and 70s through commercial trade of amphibian species. However, Bd infections have been found in museum specimens collected in the Americas in the early 1900s, which increases the uncertainty about the origin of Bd.

Research: The link between chytridiomycosis and amphibian decline is an active area of research worldwide. The genome of Bd has been sequenced, which should prove useful for identifying the origin, mechanisms of virulence, and potential control methods for this pathogen. University of California researchers have been studying this pathogen for several years, especially the impacts of Bd on populations of the mountain yellow legged frog (Rana muscosa) in the Sierra Nevada Mountains in California. This once abundant alpine frog has undergone severe declines in recent years, with numerous local die-offs. Research is being conducted on the spatial epidemiology of disease in R. muscosa, to understand why some local populations persist whereas others go extinct. Projects include identifying the modes of pathogen spread, impacts of outbreaks on alpine food webs, and the population genetic consequences of outbreaks for frogs. With regard to frog population and disease management, experiments include evaluating the efficacy of anti-fungal treatments and the feasibility of reintroducing frogs into previous outbreak areas.

More Media on the Chytrid Fungus