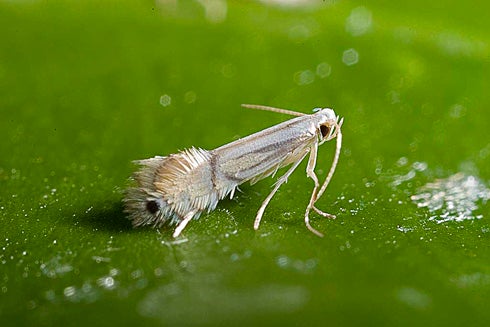 The Situation: Originating in Asia, the citrus leafminer (CLM) was first discovered in Florida in 1993.  These small moths rapidly became a significant pest, with infestation rates of up to 90% in some areas in Florida being observed within the year of introduction.  By 1995, the citrus leafminer was discovered in Texas, Central America, western Mexico (Colima), and several Caribbean islands.  In 2000, it arrived in southern California via Mexico and is now expanding its range northward.

Damage: Larvae of the citrus leafminer form serpentine mines in the tender new flush leaves of all varieties of citrus.  The mining causes the new flush to twist and curl and prevents it from expanding fully.  The citrus leafminer has a short developmental time (2-3 weeks), and as many as 7-8 generations occur in California.  In Florida, where bacterial canker is present, leaf mining activity creates opportunities for canker to enter, increasing the incidence of this disease.  Canker is not present in California.  In California, thus far, the damage has been primarily to nursery trees and new plantings because the larvae must have young citrus foliage to mine and feed on.  The pattern of CLM infestation of mature citrus has been predominantly in the fall months.  Mature citrus trees, except for coastal lemons, can tolerate heavy fall flush damage with little impact to fruit production.  Coastal lemons have continuous flushing of leaves and produce multiple crops of fruit.  The continuous flushing allows prolonged infestations of CLM that reduce vigor of trees and fruit production. 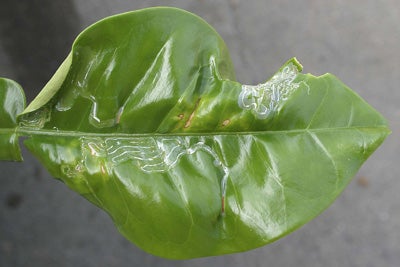 Economic Impact: Economic losses due to the citrus leafminer include: 1) increased costs for producing nursery trees due to pesticide treatments, 2) reduced sales to home gardeners, and 3) increased orchard production costs in new plantings and coastal lemons, either directly, through the use of pesticides (largely ineffective), or indirectly, through the disruption of biological control and integrated pest management programs.  Chemical control methods against the citrus leafminer are estimated to cost between $25 per acre in nurseries and $50 per acre in new plantings and lemon orchards for each treatment. 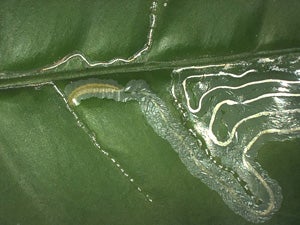 Distribution: CLM is native to Asia and can be found throughout Asia, Australia, South Africa, parts of West and East Africa, the Mediterranean area, Saudi Arabia to India, the Caribbean Islands, Central America, Mexico and South America.  CLM arrived in Florida in 1993 and spread into Louisiana and Texas.  In 2000, CLM became established in southern California, and has since spread northward into all major citrus growing regions on the state.

Research: Enhancement of biological control using parasitic wasps that attack CLM larvae or pupae is considered the most effective means of managing infestations of the citrus leafminer.  In Florida, at least nine species of parasitoids have moved naturally onto this introduced pest.  Research in California is focused on the identification and distribution of native and exotic natural enemies of CLM larvae, economic studies of the impact of CLM on lemon production, and the utilization of pheromone confusion and pesticides to control CLM in nurseries.