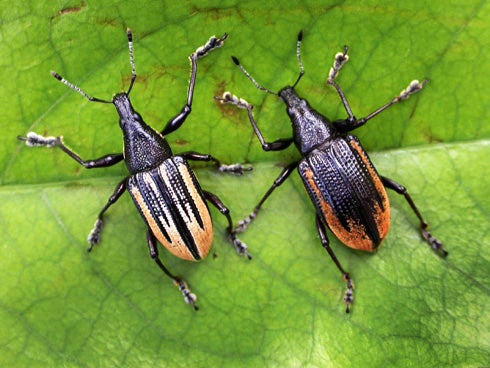 The Situation: Diaprepes root weevil is a large (3/8-3/4 inch long) colorful weevil with color forms that range from gray to yellow to orange and black.  Diaprepes is originally from the Caribbean and was introduced into Florida in the 1960s. The larval stage feeds on roots and causes serious damage to ornamentals, citrus and a number of important agricultural crops.  In 2000, Diaprepes was found in Texas, and in 2005 it was found in southern California.  Diaprepes most likely arrived in or on potted citrus or ornamentals shipped from Florida to California.

Damage: Adult beetles will feed on leaves causing a characteristic notching pattern.  However, the larval stage causes the most serious damage, feeding on roots over a 9-18 month period. Larval feeding will eventually girdle the crown area of the root system, killing the plant. This pest has a very wide host range, attacking more than 270 species of plants in 59 plant families.  In Florida citrus groves, Diaprepes root damage allows, Phytophthora, a very serious and often lethal plant pathogen to invade roots further hastening the decline of trees. 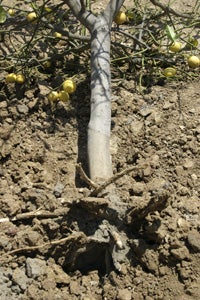 Economic Impact: Currently, Diaprepes is limited to urban areas and a small number of citrus orchards in Los Angeles, Orange and San Diego counties in southern California.  The current economic impact has been quarantine of ornamental nurseries located in infested areas and the cost of multiple pesticide treatments and the monitoring program in eradication areas.  Costs will greatly escalate if this pest expands its range into agricultural areas.  In Florida, citrus growers spend up to $400/acre for combined Diaprepes and Phytophthora control.

Research:  Research centers on monitoring methods, and the chemical and biological control of the weevil.  There are a number of parasitoids that attack the eggs of Diaprepes, a fungus is known that can kill adults, and nematodes have been identified that can attack and kill larval stages in the soil.  The potential host range and geographical distribution of Diaprepes in California may be limited by temperature, and this possibility is being studied.