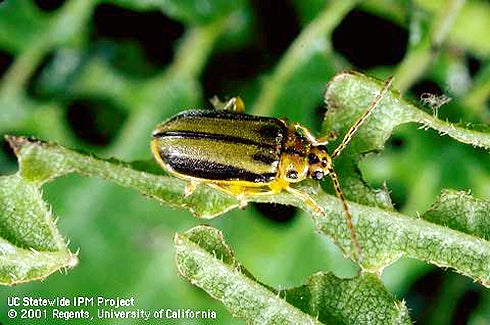 The Situation: Elms are a common shade tree planted throughout the U.S. and are valued for their large, high canopies and the shade they provide. The elm leaf beetle was accidentally introduced into the U.S. in the 1830s and is now one of the most important urban forest pests in California.

Damage and Economic Impact:Both adults and larvae feed on elm foliage, although most damage is done by the larval stages. Adult feeding damage consists of small round holes in the leaves while larvae skelotonize the underside of leaves. The larval feeding causes leaves to turn brown and eventually fall from the tree. Damage is greater on English elms (Ulmus procera) and Scotch elm (Ulmus glabra) than on Siberian elms (Ulmus pumila), while Chinese elm (Ulmus parvifolia) receives little to no damage. Loss of foliage is an aesthetic problem as well as a functional one since trees no longer provide shade. Repeated defoliation may weaken trees and increase susceptibility to diseases such as Dutch elm disease (Ophiostoma ulmi). In California, an estimated 2.5 million elms have been planted and ELB is the most commonly treated pest on those elms. Municipalities and individual homeowners often treat with either foliar or systemic insecticides. 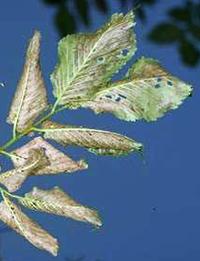 Research: Researchers at the University of California, Berkeley have developed a monitoring program for ELB based on degree days. The percentage of branch tips with eggs present at the time of egg peak allows prediction of damage for that beetle generation. This monitoring allows treatment decisions to be based on beetle populations and avoids unnecessary treatments. Releases of several strains of an egg parasitoid (Oomyzus gallerucae) have been made throughout California, but the parasitoid has not overwintered in numbers high enough to have an impact on the population of the beetle. The parasitoid has apparently established in Missouri and adjacent states and seems to be providing control of the beetle there. Bacillus thuringiensis var. San Diego has been shown to be effective in limiting damage by the beetle if applied twice in each generation. Systemic applications of the insecticides imidacloprid or abamectin also provide effective season long control. The city of Sacramento has implemented an IPM program for the beetle based on the monitoring program and spot treating of infested areas.