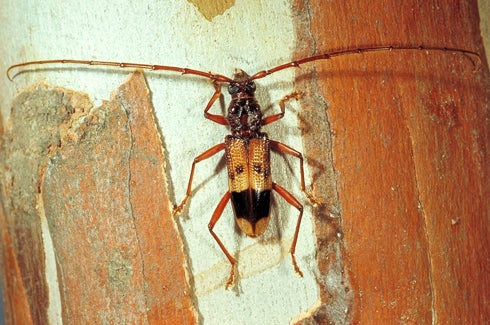 The Situation: Approximately 90 of the more than 700 species in the tree genus Eucalyptus have been introduced into North America over the last 150 years. Eucalyptus spp. are native to Australia and New Guinea. Many residents of California find the growth form, evergreen foliage, floral show, and other horticultural qualities such as drought tolerance highly desirable attributes of eucalyptus trees. However, exfoliating bark and dropped leaves can rapidly create flammable fuel loads under trees or on house roofs, sudden limb drop can damage property and injure people, and invasive growth habits of some species are problems associated with these common urban forest trees in California. The most widespread use of eucalyptus in California has been as plantings in residential areas to form shady urban forests. Low water requirements, tolerance of low quality soils, and, until recently, the absence of insect pests and diseases have made eucalyptus particularly valuable in residential areas. 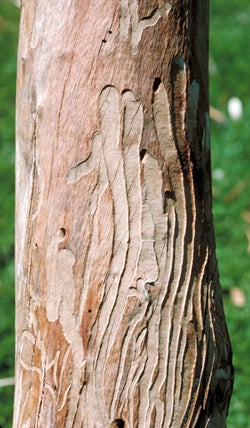 In California, eucalyptus trees were first propagated from seed brought from Australia. Consequently, insect pests and diseases associated with growing plants were not introduced with living trees. Eucalyptus that were grown in California from seeds were relatively free of insect pests until the 1980's, when the eucalyptus longhorned borer, Phoracantha semipunctata, was discovered in Orange County in 1984. In 1995, approximately ten years after the introduction of P. semipunctata, a second cerambycid species, Phoracantha recurva, was found in southern California (Los Angeles, Riverside, and San Bernardino Counties) attacking eucalyptus.

Phoracantha beetles are large, often more than an inch in length. They are characterized by prominent long antennae, an obvious feature that is characteristic of cerambycid or long horn beetles. The two species are easily separated by the patterns on the wing covers (elytra) that lie across the backs of the beetles.

P. semipunctata has been accidentally introduced into virtually all Eucalyptus-growing regions of the world (e.g., Brazil, Canary Islands, Chile, Egypt, France, Israel, Italy, Morocco, Reunion Island, Spain, and South Africa) and is causing significant tree mortality in many of the areas it has invaded. P. recurva is demonstrating a similar high level of invasion throughout areas of the world with significant eucalyptus production.

The Problem: Phorocantha beetles are attracted to freshly cut eucalyptus wood, dying limbs, and trees suffering from stress, especially lack of water. Drought stress is exacerbated in many areas of California because many eucalyptus trees are growing in unmanaged or minimally managed environments with no supplemental irrigation. Eucalyptus species that naturally grow in wetter areas of Australia have been planted in California. When these trees experience prolonged dry periods, they undergo drought stress and this makes them susceptible to attack by these beetles. 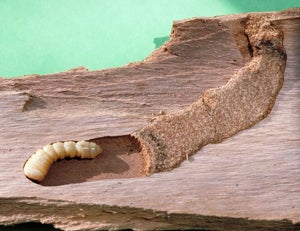 The major damage these beetles cause to eucalyptus is done by feeding beetle larvae. Female beetles lay their eggs under loose bark, and when the eggs hatch, the young larvae burrow through the bark layer and into the cambial layer which lies just below the bark. Once the cambial layer of the tree is reached the majority of the feeding occurs here. The cambial layer is the only "living" part of the tree. The cambial layer contains the phloem (food conducting tissues; old phloem becomes bark) and xylem (water conducting tissues; old xylem becomes wood). As the tree grows it constantly renews phloem and xylem tissues, and only the new xylem and phloem transport water and nutrients. Beetles suffer high mortality in trees with high internal moisture levels because water floods feeding tunnels and drowns larvae.

Extensive damage to the cambial layer "ring barks" or girdles trees and the destruction of phloem and xylem means infested trees can no longer move water and nutrients from the roots to the leaves. Trees with this type of extensive feeding damage often die. When trees are heavily infested with beetle larvae, the chewing and scraping made by feeding larvae is clearly audible at some considerable distance from trees.

Over the spring and summer it may take around four months for beetles to develop from eggs to adults, while beetles developing over fall and winter may take up to nine months to complete development. Phoracantha beetles have around 2-3 generations per year in California.

The parasitoid can complete around six generations for every beetle generation, and by preventing the hatching of eggs, damage to eucalyptus trees by boring beetle larvae has been greatly reduced. It has been estimated that up to 90% of P. semipunctata eggs that are laid under bark on eucalyptus trees are killed by A. longoi.

This parasitoid is unable to kill eggs of P. recurva as effectively as it has killed eggs of P. semipunctata even though these two beetles are very closely related. The reason for this lack of efficacy is due to a defensive response of P. recurva eggs to larvae and eggs of A. longoi which effectively kills the parasite before it can damage the host.

Interestingly, the very effective control of P. semipunctata by A. longoi has reduced competition with P. recurva and this lack of competition and ineffective attacks on eggs has allowed P. recurva to emerge as a more serious pest of eucalyptus than it previously was. Field surveys have revealed that the proportion of P. recurva in samples of both eucalyptus longhorn borers taken in California increased from 0.1% in 1995, to 4.7%, the following year, and had reached 74% in 1997.

It would appear that another parasitoid species from Australia that is specific to the eggs of P. recurva is needed to provide effective biological control of this pest.

Four species of parasitoids from Australia that attack larvae of P. semipunctata and P. recurva have been introduced into California. One of these, Syngaster lepidus has been become established and parasitizes around 27% of Phorocantha larvae. Parasitoids locate beetle larvae by following vibrations emitted feeding within tunnels. Female parasitoids have long ovipositors, or egg laying tubes, to drill through the wood to beetle larvae feeding inside tunnels. The ovipositor is moved around in the tunnel until the beetle larvae is detected. At this time, the parasitoid injects a paralyzing venom that immobilizes the beetle larvae. A parasitoid egg is then laid next to the paralyzed host and upon hatching the parasitoid larva feeds on the eucalyptus longhorn borer beetle larva eventually killing it. The parasitoids pupate inside the host tunnels and upon completion of development they emerge from host trees to commence mating and host searching.

Text and provided by Mark Hoddle, Director of Center for Invasive Species Research, Extension Specialist
Photos courtesy of Jack Kelly Clark and the Regents of the University of California and Mike Lewis