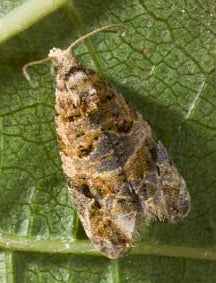 The Situation: The European grapevine moth (EGVM) is native to southern Italy, but is also found throughout Europe and in some regions of Africa, the Middle East, Russia, Japan, and Chile. Initial detection of European grapevine moth in the United States occurred in Napa County, California, in 2009. Arrival of this insect poses a significant threat to the state’s grape production capacity because the moth’s larvae feed on grape flowers and fruits. As of 2010, a quarantine is operational in several California counties in an attempt to stop the spread of EGVM to surrounding areas.

Damage: It should be emphasized that the larvae, rather than adult European grapevine moth, are responsible for the most severe damage to grapevines. Over the course of the season larvae preferentially feed on and damage developing grapevine flower clusters, immature berries, and mature berries. Late in the season, damage is compounded because larval feeding damage increases grape cluster vulnerability to fungal infections, most likely caused by the pathogen Botrytis cinerea. 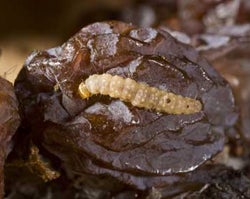 Life Cycle: Adult European grapevine moth females are capable of laying 35 eggs per day for approximately 6 days. Hatching of eggs occurs anywhere from 3 days to 1 and a half weeks after they were laid, depending on ambient temperatures. It takes approximately 3 to 4 weeks for young larvae to fully mature, and it is during this stage of its life that European grapevine moth causes the most damage to grapevines. The pupal stage lasts an additional 1 to 2 weeks, after which adults emerge. Typically, adults will live for about 1 to 3 weeks. Multiple generations of EGVM frequently occur in a growing season, with reports of up to 4 generations in a single year being possible in areas with favorable climates and food. European grapevine moth overwinters as a pupa, constructing cocoons in the bark of grapevines or in soil cracks. First-generation adults emerge from pupation when temperatures become warm, usually in the middle of spring. 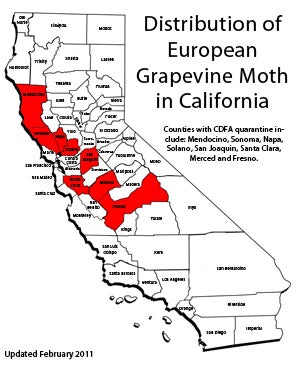 Distribution: The European grapevine moth is native to southern Italy, but has expanded its range throughout most of Europe and into regions of the Middle East and Russia. It has also been reported in parts of Africa, Japan, and Chile.

In the United States, EGVM was first detected in Napa County, California, in late 2009. Since then this invasive insect has been found in at least nine counties of California. Soon after the initial detection quarantine procedures were put in place to contain its spread. The regions affected include parts of the following counties: Fresno, Lake, Mendocino, Merced, Monterey, Napa, San Joaquin, Santa Clara, Solano, and Sonoma counties. The quarantine order describes guidelines for the proper transportation and disposal of grapes and other favored plant species.