The Situation: In 2011 in Ventura County, while searching for the non-native and invasive brown widow spider, Latrodectus geometricus, a discovery was made of a large brown spider that was not recognized as being part of the southern California spider fauna. Several specimens were collected and brought back to the lab for identification. They turned out to be a European spider, Steatoda nobilis, which is the first documentation of this spider in the Western Hemisphere.

Distribution: European Spider is known from England, Spain and other portions of western Europe. In California, it was collected in Monterey, San Diego, Alameda and Ventura counties. It can be very common where it is found. Speculation is that it might have been introduced into California via the U.S. Naval base in Port Hueneme.

Identification: There are many spiders of the genus Steatoda in California but none get as large as S. nobilis. Previously the largest Steatoda in California was the false black widow, S. grossa, which is slightly smaller than a mature black widow, is chocolate brown or dark plum in color and may have a small white or tan band on the front surface of its abdomen. In contrast, S. nobilis is about the size of a mature black widow spider, and has a thick white or tan band on the front part of the abdomen and on the back in many specimens, is a white pattern that looks like a house with a domed or peaked roof pointing toward the front of the body, often with two dark “windows” in the body of the house (Figure 1). However, in some of the mature specimens, this house pattern is lost such that the only portion that is retained is the roof (Figure 2). Males are somewhat similar except that they have smaller abdomens and may have more white design on their bodies (Figure 3). 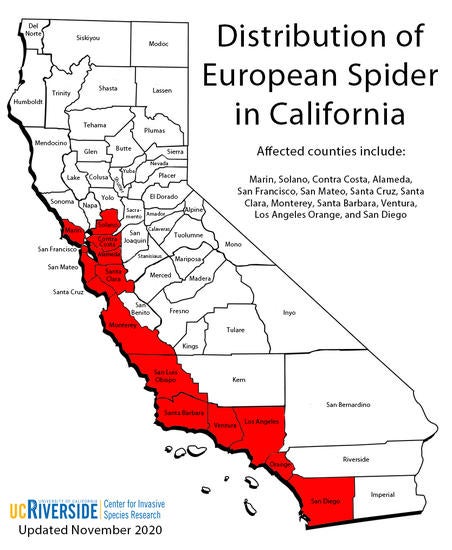 Damage: The spiders are large but there is only one recorded bite from England which had very minor effects. This spider IS NOT considered to have any significant venom toxicity.

Research: At UCR, we are interested in documenting the distribution and possible spread of this newly discovered spider in southern California. In 2012, it was only documented in Ventura County, however one female was collected on the Fullerton College campus. Although there is no knowledge whether this was part of an established population or was an incidental encounter. Since then it has spread to Alameda, Monterey and San Diego counties.

If you collect a spider that you think is Steatoda nobilis, we would be interested in knowing about it. A good in-focus photo of the abdomen from above would be sufficient if you don’t want to send the spider. However, in order to prevent the mailing of many false black widows, please see the pictures above to determine S. nobilis from S. grossa. The false brown widow may have spots on its abdomen (Figure 1) or be almost completely shiny brown (Figure 2).