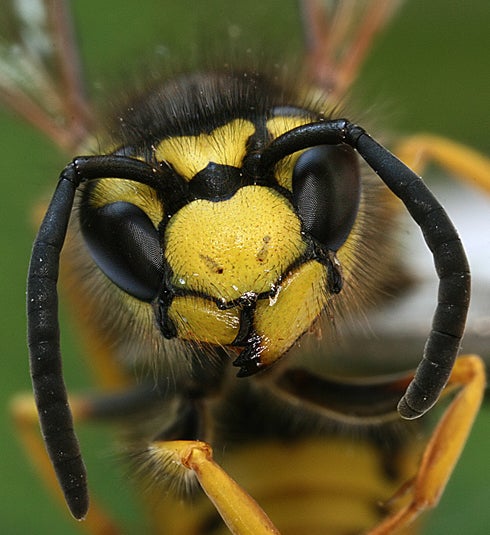 Damage: The strain of German yellowjacket that has made its way to California has a proclivity to nest in attics or in the walls of buildings. This proximity to people makes this species of yellowjackets more of a public health threat. Solitary foundress queens overwinter in protected places and start new colonies in a structural cavity in the spring. The queen tends her first brood of workers and then becomes nestbound as the colony rapidly increases in size. The nest is constructed of a papier-mâché like substance that surrounds tiers of developing wasps. By July or August there may be more than 4,000 wasps in the nest, which may be more than 2 feet in diameter. A cadre of guard wasps attack if the nest is disturbed. A scent emitted by the guards incites nestmates to attack, often resulting in multiple stings to victims. This pest may pose a significant conservation threat to native animals in California, a problem that has been observed overseas (e.g., New Zealand) where this wasp is invasive. 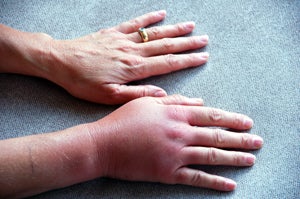 Economic Impact: Several incidents of evenomization by German yellowjackets have been reported, but no deaths have yet been attributed to them. Eradication and removal of active nests from structures can be difficult and costly. Nests that are killed must be removed to prevent foul odors and the buildup of flies and other scavenger insects. Although yellowjackets collect insect prey, they also scavenge meat which puts them into contact and conflict with humans. These are the wasps which harass people at outdoor eateries, theme parks, receptions and picnics, congregate at bakeries or candy factories, and they actively seek out spilled sodas at sporting stadiums, etc. Their scavenger behavior puts them into interaction with humans which increases the potential for sting incidents as well as being a nuisance which could curtail or cancel outdoor activities. 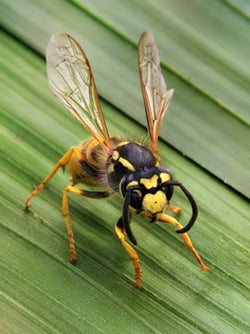 Research: Strategies are being developed at the University of California, Riverside to prevent and control this potentially important insect. A synthetic chemical lure in traps is being used to detect this species and to determine when it is troublesome. Research is being conducted to develop safe and effective area-wide baiting programs for instances where German yellowjackets become established. Baits containing growth regulators or entomopathogens are being investigated. Several pesticides have been tested for palatability to yellowjackets with two (fipronil and imidicloprid) being taken in high quantities. These compounds may be useful for localized eradication efforts. Limited field trials showed that Fipronil mixed with ground chicken baits eliminated German yellowjacket populations within hours in small areas. Subsequent monitoring in the following weeks showed no resurgence of German yellowjacket populations in treated areas indicating that a very short experimental exposure of fipronil was sufficient to destroy the colony completely.