The Situation: Arundo donax, also known as giant reed or arundo, is native to Eastern Asia but has been widely planted around the world because this plant has a variety of practical uses. Arundo has been used for walking sticks, fishing poles, musical instruments, and recently it is being investigated as a biofuel source. Arundo was first planted in California in the 1820’s to provide roofing materials and for erosion control in the Los Angeles Basin area. Arundo has also been widely planted in parts of the USA, Mexico, Central and South America, the Mediterranean, the Caribbean, Australia, and New Zealand. In many of these areas it is now considered an invasive weed (e.g., California, Texas [especially the Rio Grande River Valley - see photo above], Hawaii, Nevada, Utah, Missouri, Virginia, New Mexico, and Florida). 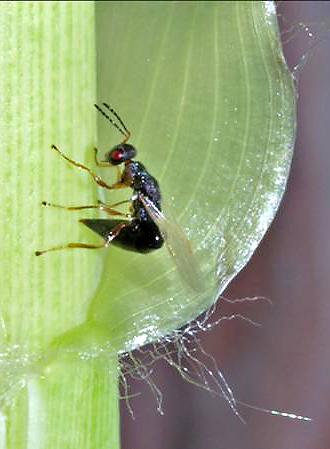 The Problem: Arundo is an exceptionally fast growing plant, growing about 4 inches per day and reaching a mature height of 25 feet in about 12 months. An acre of arundo can produce about 25 tons of biomass per acre for each of two annual harvests. The plant is very tolerant of a variety of environmental conditions and can be found growing in damp riparian areas, and it is tolerant of moderately saline soils too. Because stands of arundo are so dense native plants are typically displaced and the animals associated with these native plants are unable to utilize arundo so their populations decline also. In California, arundo infestations are particularly problematic because this weed chokes out native willows, it can provide a lot of fuel for fires which are typically very uncommon in riparian areas (arundo appears to be very well adapted to fire so fires promote arundo invasions in these sensitive habitats). In the Santa Ana River Basin in Southern California, the fire fuel load in riparian areas has almost tripled because of arundo infestations. During floods, large rafts of dislodged arundo can cause bridges to collapse as tons of arundo pile up around bridge supports.  Because of the serious and widespread nature of arundo infestations in California, several counties have formed task forces specifically to manage to this weed (e.g., The Santa Ana River Arundo Management Taskforce, and Team Arundo del Norte). In North America arundo appears to reproduce asexually and seldom produces viable seeds even though this plant produces flowers. The major mode of propagation is via vegetative reproduction either by underground rhizomes, or from plant fragments. 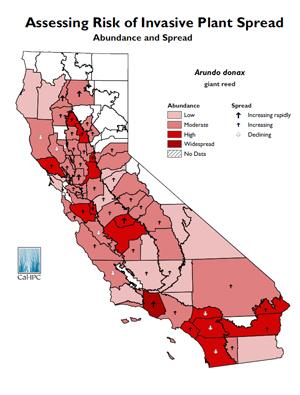 Economic Impact: The economics of arundo’s impact on water use has been estimated using data from transpiration rates. Arundo transpires 56,200 acre-feet of water per year on the Santa Ana River, compared to an estimated 18,700 acre-feet that would be consumed by native vegetation. If arundo were not drawing water from the Santa Ana River Basin there would be enough water to serve a population of about 190,000 people. If that amount of untreated water (37,500 acre-feet) was purchased from the Metropolitan Water Association it would cost approximately $12,000,000 in 1993 dollars (1993 was the year this economic study was conducted.)

Research Programs on Arundo: University of California scientists are studying aspects of the invasion ecology of this plant, control strategies that utilize herbicides or mechanical removal from infested areas. One promising long-term control strategy that is being developed by USDA-ARS researchers in Texas is biological control. In California and other parts of the USA there are no organisms that cause substantial feeding damage or mortality to arundo. This lack of herbivory has in part allowed arundo to flourish in areas that it has invaded. Foreign exploration for herbivores feeding on arundo in its native range have found several host specific natural enemies that may be able to substantially reduce the vigor of arundo by simply feeding on this plant. The herbivores of interest are all insects and include Arundo wasp, Tetramesa romana; the Arundo scale, Rhizaspidiotus donacis; and the Arundo fly, Cryptonevra sp. Safety evaluations suggest that these insects are very host specific and pose no substantial threat to other plants. Consequently, efforts are now under to mass rear and establish these natural enemies in areas with severe arundo infestations.