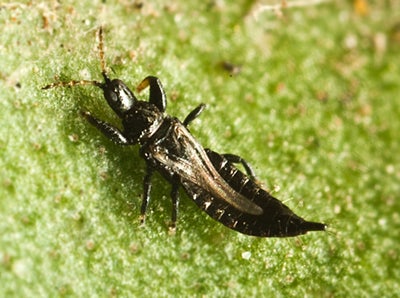 The Situation: In southern California, Klambothrips myoporiMyoporum, a plant genus native to Australia and New Zealand. This thrips causes considerable leaf deformation through the feeding activity of larvae and adults. This pest is likely native to Australia or New Zealand where it is probably a specialist on members of Myoporum.

Damage: The plant species on which thrips galling damage to leaves has been noted is primarily Myoporum laetum, a plant native to New Zealand. However, new varieties of Myoporum developed by the horticultural trade, include a susceptible prostrate form, "Myoporum Pacificum". Additional Australian species are sold in California, including M. debile and M. parvifolium, and M. insulare. It is likely all species of Myoporumin California will be attacked by K. myopori. 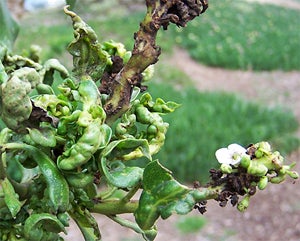 Economic Impact: Species of Myoporum are planted along 1000's of kms of residential and freeway road margins in California. Consequently, continued planting and traffic movement can be expected to facilitate the continued widespread distribution of this thrips. The drought hardiness of Myoporum, and the fact that the plants are generally so pest free, has made members of this genus desirable for ornamental planting. The broad environmental tolerances of Myoporumis now leading to Myoporum to be considered an invasive weed in some areas of California. Seed dispersal by birds is thought to be a primary mechanism causing the spread of this weed in wilderness areas. Paradoxically, if the weed status of Myoporum increases in California, then this new pest thrips my actually come to be regarded as beneficial because it has value as a biological control agent, especially if it manages to either reduce the competitiveness of invasive Myoporum or kill it outright. 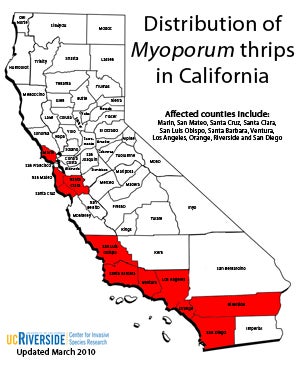 Distribution: Myoporum thrips has been reported from at least ten California counties; Los Angeles, Marin, Orange, Riverside, Santa Barbara, Santa Clara, Santa Cruz, San Diego, San Mateo, San Luis Obispo, and Ventura. It is expected that the horticultural trade will help to rapidly spread this thrips into new areas as plants are shipped from infested to non-infested areas. Consequently, this thrips potentially poses a huge threat to naio, Myoporum sandwicense, a keystone native species in Hawaii. Myoporum thrips was unofficially detected on the island of Hawaii in March 2009. It is imperative that border control officials in countries with native myoporum collectively watch for imports of Myoporaceae and remove Myoporaceae plants from around ports of entry to reduce the likelihood of invaders establishing readily.

Research: There is currently no concerted research effort against this pest investigating control strategies (i.e., the potential for biological control), climate preferences, or basic life history studies. Limited trials have been conducted to evaluate the efficacy of pesticides for controlling Myoporum thrips in residential areas in San Diego County.

More Media on the Myoporum Thrips