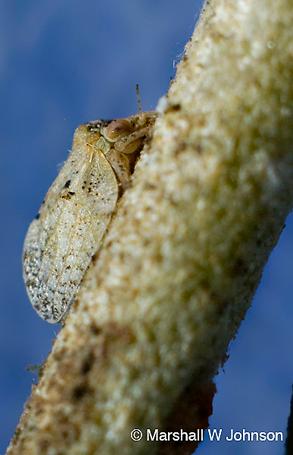 The Situation: Psyllids are related to aphids, mealybugs, scales, leafhoppers, and sharpshooters. Euphyllura olivine, the olive psyllid, was discovered in July 2007 in the California counties of San Diego and Orange and positively identified in September 2007. This insect is viewed as a potential pest of commercial olives that are produced in California’s Central Valley and along the coast. The life stages of Euphyllura olivina include an egg, five nymphal instars, and adults (both sexes). Olive psyllids are very small insects ranging from 0.015 inches to 0.06 inches in length as immatures and about 0.1 inches as adults. The life cycle is about 3 months depending on temperature. Optimal growth conditions are between 68 and 77°F. Females may lay more than 1,000 eggs. Females start egg laying when new shoots appear on olive trees. Eggs are deposited on the top of twigs or among the leaves of minor shoots. Although Euphyllura olivina is common in many olive growing areas in the Mediterranean and Middle East, little is known about its biology in those areas, and its distribution in California is not certain. Likewise, nothing has been reported on natural enemies (e.g., parasitoid wasps, lacewings, ladybugs) attacking the psyllid within infested areas of the state. It is unclear at this time whether the distribution of Euphyllura olivina will significantly expand beyond San Diego and Orange Counties. Infestations were found in and near Temecula (Riverside County) during the spring and summer of 2009. Its sensitivity to temperatures above 81°F suggests that it may not obtain high densities during the summer period in the Central Valley when temperatures are commonly above 95°F. However, it may establish in the Central Valley and become a significant pest during spring before temperatures become high and buds and flowers are on the trees. This would be the time when it could impact olive production by reducing the numbers of fruit that complete development. Additionally, olive psyllid may be able to impact the production of olive oil if it can expand its northern distribution along the cooler California coast, where significant amounts of oil are produced.

Damage: Euphyllura olivina has three host plants that it feeds upon and lays eggs on: a) olive; b) Russian olive (Elaeagnus angustifolia [oleaster]), and c) mock privet (Phillyrea latifolia). There are typically three generations of olive psyllid per year. The first generation becomes active in the spring as temperatures warm up. The second generation becomes inactive when temperatures exceed 81°F, and active again when temperatures drop giving rise to the third generation. Above 90°F survival may be limited. Nymphs and adults feed by rupturing cells and ingesting sap. Feeding in this manner reduces nutrients that are essential for tree development and fruit production. Plant parts attacked include the buds, tender shoots, floral axes, inflorescences, and young fruits. Nymphs secrete a sticky wax (similar to that produced by mealybugs), which accumulates on the foliage and stimulates premature flower drop. The wax can actually protect the psyllid from some insecticides so it is best to control the first generation when buds and flowers are not present. Nymphs and adults produce honeydew (similar to aphids), which can produce sooty mold. The accumulation of sooty mold can possibly be a problem on olive trees. When nymphal colonies are on the apical parts of young shoots, sap loss is not important. When colonies are on inflorescences, the level of sap loss is directly proportional to psyllid numbers and this could affect the amount of fruit that is set.

Economic Impact: Reductions in olive yield in some areas outside the USA have been as much as 40 to 60% when olive psyllid is present. Population densities greater than 20 nymphs per inflorescence can cause such losses. These types of losses have not been reported in California. Presently, most infestations of Euphyllura olivina are found in urban and residential areas of San Diego and Orange Counties, where they are confined to ornamental trees around homes, in shopping areas, and parks. Infestations have been seen in olives near vineyards in the Temecula area and in wooded areas near Fallbrook. The highest populations observed have been in the cities of Carlsbad and San Diego. Because their waxy secretions reduce the attractiveness of olive trees and contaminate anything that comes within contact of the infested trees, efforts have been made to eliminate the infestations with insecticides or by heavily pruning infested plant parts (mainly suckers). If Euphyllura olivine is able to establish in the Central Valley, it may be a significant problem for commercial olive producers as well. 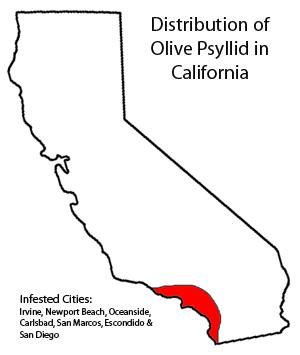 Distribution: Three insect species are commonly referred to as the olive psyllid: Euphyllura phillyreae Foerster, Euphyllura straminea Loginova, and Euphyllura olivina (Costa). They are found in the Mediterranean Basin and the Middle East. These species have varying and somewhat overlapping distributions in the world. Euphyllura olivina can be confused with Euphyllura straminea because they are similar in appearance. Surveys to date in California indicate that Euphyllura olivina is limited to the areas from Huntington Beach, Newport Beach and Irvine (all in Orange County) in the north to the city of San Diego in the south. The psyllid has been found as far east as Temecula and Escondido. Olives checked in the Palos Verdes area, Anaheim, Burbank, Santa Clarita, Sylmar, Riverside, Sun City, Perris, and Hemet were free of the insect in 2009.

Research: Studies conducted by University of California Riverside researchers and the CDFA are currently limited to determining the distribution of the psyllid in California and defining its seasonal biology where is it is found. Of special importance is evaluating the ability of Euphyllura olivina to survive summer temperatures in the inland valleys. If this is possible, olive production areas in the Central Valley may be threatened by this pest. Some general predators (e.g., mealybug destroyer, lacewing larvae) have been found associated with the psyllid, but no parasitized individuals have been collected. Efforts were made to establish colonies of one parasitoid collected in Spain, but these were unsuccessful. Plans are underway to evaluate the impact of the predators Chrysoperla rufilabris and Cryptolaemus montrouzieri on Euphyllura olivina infestations.