The Situation: Persea mite, Oligonychus perseae, was first described in 1975 from specimens collected from avocado foliage intercepted from Mexico at an El Paso, Texas, quarantine facility. Persea mite is native to Mexico and damages avocados in arid regions, a pest in the state of Michoacan where Hass avocado production is greatest. Persea mite has also been recorded as a serious pest in Costa Rica, Israel, and Spain. In California, persea mite was first discovered attacking avocados in San Diego County in 1990 and was originally misidentified as Oligonychus peruvianus. By the summer of 1993, the pest had spread north to Ventura County. Santa Barbara had its first record in spring 1994, and, in 1996, persea mite was found in San Luis Obispo County. Contaminated fruit bins, harvesting equipment and clothing probably assisted in the rapid dispersal of persea mite throughout California. 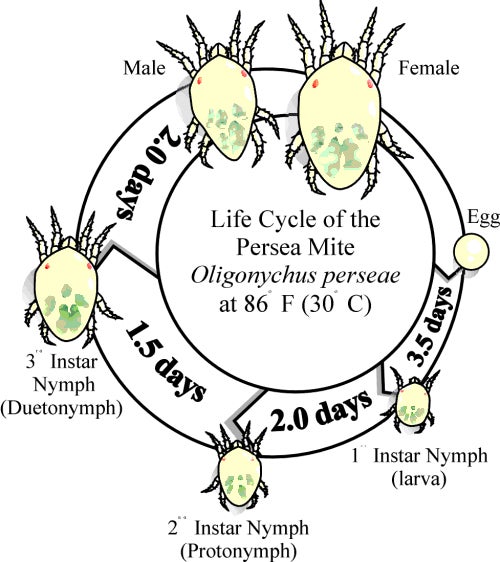 Damage: Persea mites feed in colonies beneath protective webbing (i.e., nests) along midribs and veins on the undersides of leaves, and feeding damage produces characteristic circular necrotic spots. High mite densities (500-2000 per leaf) and subsequent feeding that damages 7-10% of the leaf surface can cause partial or total defoliation of trees. Mite-induced defoliation opens the tree canopy, increasing the risk of sunburn to young fruit and exposed tree trunks. Premature fruit drop can occur. Defoliation by persea mites promotes new flushes of growth which disrupts carefully planned irrigation, fertilization, pruning and dust management programs. Mite-induced flushing may enhance avocado thrips populations, which prefer young leaves for feeding and oviposition. This mite builds to extremely high densities over summer before declining in fall. Population declines occur because of resource depletion occurring from excessive feeding damage to leaves. The current industry control practice is to apply foliar applications of insecticides. In some instances insecticide applications have caused resurgence of pest populations probably because of declines in numbers of common generalist predators. Resurgence results in persea mite population densities exceeding those found on non-sprayed trees.

Distribution: This pest infests 99% of avocado acreage in California (There are no records of this pest in the San Joaquin Valley but it has been reported from avocados growing in San Francisco.) This mite is sensitive to high temperatures (>95oF) and low humidity when experienced over several consecutive days, and abrupt population crashes in the field have been observed under these conditions. This mite has proliferated in areas where temperatures are moderated by the cool marine influence. It is highly probable that persea mite originated from Mexico and arrived in California on smuggled plants.

Research: Scientists at UCR have investigated the efficacy of releases of predatory mites for persea mite control. A highly effective natural enemy, Neoseiulus californicus, is commercially available and has been shown to be very effective, but is cost prohibitive. Seven commercial cultivars of avocado have been screened for resistance to persea mite feeding, and a new cultivar, Lamb Hass, is quite resistant to this pest. The mechanism of resistance, when compared to the highly susceptible Hass cultivar, may be related to patterns of nutrient cycling in the plant over late spring and early summer when persea mite normally outbreaks, or to leaf surface morphology that differs significantly from Hass. Currently, most research is focusing on evaluating pesticides for control of this pest.

More Media on the Persea Mite