The Situation: Recently a new beetle/disease complex was detected that causes a Fusarium dieback on avocado and other host plants in and near Los Angeles and Orange Counties. The disease is caused by a new, yet unnamed Fusarium sp. that forms a symbiotic relationship with a recently discovered Euwallacea sp. beetle, which serves as the vector. This beetle is morphologically indistinguishable from the Tea Shot Hole Borer, Euwallacea fornicatus (an exotic Asian ambrosia beetle). We suspect that this is a new species (for which we propose the common name: Polyphagous Shot Hole Borer) based on the large differences in DNA sequence between the beetle invading California, and beetles from tea plantations in Sri Lanka and other Asian collection sites. The beetle discovered in California is smaller than a sesame seed (about 0.1 inch in length). The identical new beetle species was found in Israel in 2009 in commercial avocado orchards where it has been causing damage to avocado.

Damage: Fusarium new species is inoculated into its hosts by the beetle. The fungus destroys the food and water conducting systems of the tree, eventually causing stress and dieback. The larvae of the beetles within the beetle gallery in infected trees feed on the fungus, forming a symbiotic relationship the fungus and beetle. 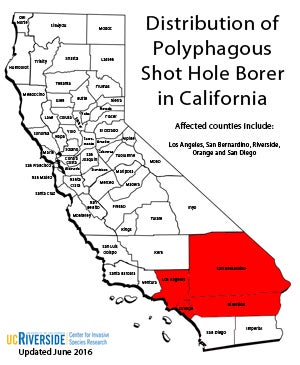 Fusarium dieback symptoms: White powdery exudate either dry or surrounded by wet discoloration of the outer bark in association with a single beetle exit hole. While there is no visible injury to the bark at this stage of colonization, examination of the cortex and wood under the infested spot bored by the beetle reveals brown discolored necrosis caused by the fungus.

Spread in California: Both the fungus and the beetle were found on several backyard avocado (cv. Hass, Bacon, Fuerte, Nabal) trees in residential neighborhoods and commercial avocado groves in South Gate, Downey and Hacienda Heights, and several public arboretums in Los Angeles and Orange Counties.