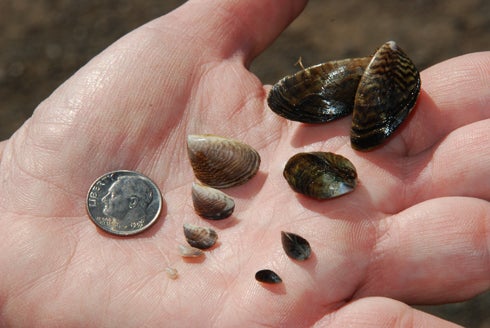 The Situation: Quagga and zebra mussels are aquatic invasive species that are native to eastern Europe. The quagga mussel originated from Dnieper River drainage of Ukraine. The zebra mussel was first described from the lakes of southeast Russia and its natural distribution also includes the Black and Caspian Seas. Quagga and zebra mussels get their common names from the zebra-type striping on the shells. Both mussel species are small and typically grow to the size of a fingernail. They are prolific breeders and these mussels can attach to both hard and soft surfaces in freshwater ways.

Zebra mussels have a long history of invasion and have successfully established in Great Britain (1824), The Netherlands (1827), The Czech Republic (1893), Sweden (1920), Italy (1973), the Great Lakes in the USA (1988), and California (2008). Quagga mussels were first found in the USA in the Great Lakes in 1989, Nevada in 2007, and California in 2008. Ballast water discharge from transoceanic ships is thought to be responsible for the long distance spread of zebra and quagga mussels from their original home ranges in eastern Europe. Short distance spread between fresh waterways within countries most likely occurs via the movement of recreational boats. This occurs when boats are not cleaned and dried adequately and contaminated watercraft are then moved from infested waterways to pristine water bodies where mussels are accidentally introduced. These mussels can survive for 3-5 days out of water without suffering lethal desiccation.

The Problem: Quagga and zebra mussel invasions have had catastrophic impacts in the ecosystems in which they have established. These organisms clog water intake structures (e.g., pipes and screens), which greatly increases maintenance costs for water treatment and power plants. Recreational activities on lakes and rivers are adversely affected as mussels accumulate on docks, buoys, boat hulls, anchors, and beaches can become heavily encrusted.

The shells of both mussel species are sharp and can cut people, which forces the wearing of shoes when walking along infested beaches or over rocks. Mussels adhering to boat hulls can increase drag, affect boat steering, and clog engines, all of which can lead to overheating and engine malfunctions. Ecological problems also result from mussel invasions. Zebra and quagga mussels can kill native freshwater mussels in two ways: (1) attachment to the shells of native species can kill them, and (2) these invasive species can outcompete native mussels and other filter feeding invertebrates for food. This problem has been particularly acute in some areas of the USA that have a very rich diversity of native freshwater mussel species.

The encrusting of lake and river bottoms can displace native aquatic arthropods that need soft sediments for burrowing. In the Great Lakes this had lead to the collapse of amphipod populations that fish rely on for food and the health of fish populations has been severely affected.

These mussels have been associated with avian botulism outbreaks in the Great Lakes which have caused the mortality of tens of thousands of birds. Because of their filter feeding habit, it has been estimated that these mussels can bioaccumlate organic pollutants in their tissues by as much as 300,000 times when compared to concentrations in the water in which they are living. Consequently, these pollutants can biomagnify as they are passed up the food chain when contaminated mussels are eaten by predators (e.g., fish and crayfish), who in turn are eaten by other organisms (e.g., recreational fishermen who eat contaminated fish.) High mussel populations can increase water acidity and decrease concentrations of dissolved oxygen.

Interestingly, invasions by quagga and zebra mussels have been documented as having some positive affects on receiving ecosystems. For example, filtration of water by mussels as they extract food removes particulate matter. This filtration has improved water clarity, and reduced the eutrophication of polluted lakes. In some instances these improvements may have benefited local fishing industries. Conversely, improved water clarity allows penetration of light to greater depths which can alter the species composition of aquatic plant communities and associated ecosystems. This improved water quality is thought to aid algal blooms that get washed ashore where they rot making recreational beaches unusable. Further, the highly efficient removal of phytoplankton can deprive other aquatic species of food. 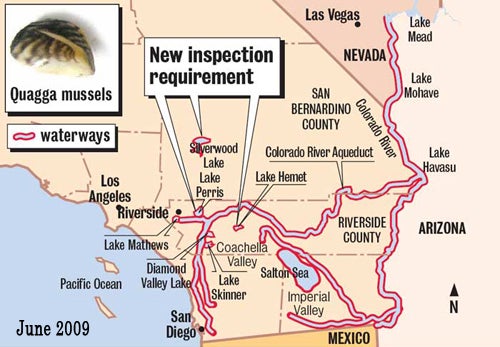 Invasion success in some areas of California may be affected by water chemistry. Waterways around the Sierra Nevada mountains may have insufficient calcium (an element needed for shell growth) and some lakes in northeast California may be too salty for mussel survival. However, the general consensus is that most freshwater ways in California will be accommodating to zebra and quagga mussels.

Economic Impact and Management: Zebra and quagga mussel invasions create an immense financial burden because of the need to continuously and actively manage these pests. It has been estimated that it costs over $500 million (US) per year to manage mussels at power plants, water systems, and industrial complexes, and on boats and docks in the Great Lakes. Similar yearly management costs are anticipated for California. For example, a recent estimate (2009) by the Army Corps of Engineers indicates that quagga mussels could cause annual loses of $22 million to the Lake Tahoe region should they establish there. The report details potential damage to tourism, reduced property values, and increased maintenance costs. Management of problematic mussel populations may be achieved in different ways in California. Water draw downs in canals and aqueducts could be used to kill mussels by drying them out. Poisons such as chlorine and copper sulfate which are toxic to quagga and zebra mussels could be employed under certain conditions.