The Situation: Several species of brightly colored, ground dwelling bugs are familiar to California residents who observe the insects running over dry ground, feeding and migrating among urban vacant lots and weedy fields.  Most familiar are those species with contrasting red and black coloration which feed upon developing or mature seeds and seed pods.  The red and black milkweed bugs of the family Lygaeidae (Lygaeus spp. and Oncopletus spp.) and the introduced Rhopalid seed bug (Jadera haematoloma) are frequently encountered in urban landscapes, vacant lots, and wild land areas of California.  Recently, another brightly colored, mostly seed feeding bug belonging to the family Pyrrhocoridae or "Red Bugs" has become established in southern California and is drawing attention due to large aggregations of the bright red and black nymphs and adults feeding on annual broadleaf weeds in open space areas.

Scantius aegyptius, an old world pyrrhocorid bug, native to the eastern Mediterranean region, was documented for the first time in North America in Orange County during June of 2009.  Reports of this insect from other southern California locations (i.e., Riverside County) suggest that this insect has been established for a year or more prior to these Orange County collections.

Description:  Adults are typically 7 to 9 mm in length and display aposematic warning coloration of contrasting red and black. The head, antennae and legs are black.  The forewings (hemelytra) which cover the back of the insect are conspicuously marked with two round black spots against a bright orange-red background color.  The thoracic sternites are red-orange and the abdominal sternites are bright orange-red with various black markings laterally.  Nymphs can be entirely red, with increasing dark maculation developing with each molt. 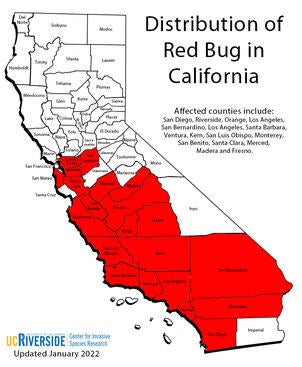 Male S. aegyptius possess enlarged front femora, apparently used for grasping the female during copulation and mating pairs are common wherever this bug is encountered.

Damage: The literature contains very little information regarding the biology of S. aegyptius and Scantius species in general are not considered to be economically important species.  In California, Scantius has been observed feeding on the developing seeds and stems of Knotweed (Polygonum spp.) and Malva (Malva parviflora).  It is likely that S. aegyptius will feed on the seeds of several species of annual herbaceous plants.

The most noticeable impact of S. aegyptius in California will likely be the presence of large numbers of nymphs and adults migrating from drying annual weeds into adjacent developed areas.  These migrations consisting of thousands of individuals can be very conspicuous and lead to large aggregations on small patches of host plants causing concern to local residents who notice these obvious aggregations