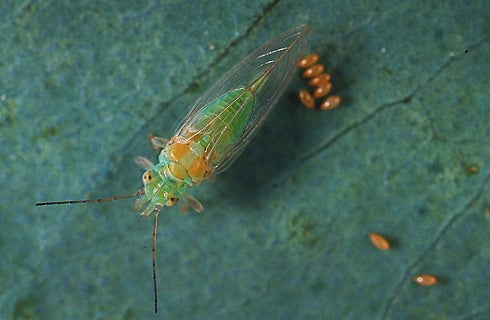 The Situation: Red gum lerp psyllid is an insect that is native to Australia. In June 1998, this insect invaded California and was first found in Los Angeles County. This pest feeds exclusively on species of Eucalyptus and in California it exhibits high preference for river red gum (Eucalyptus camaldulensis), flooded gum (E. rudis), and forest red gum (E. tereticornis). Red gum lerp psyllid has demonstrated remarkable invasion potential. After its initial discovery in California, red gum lerp psyllid was found in Baja California, Mexico in 2000, Florida and Hawaii in 2001, Mauritius 2001, South America in 2002, and Portugal and Spain in 2007. This pest is a major threat to susceptible Eucalyptus species that are grown in urban landscapes, as wind shelters, or as commercial forests.

Psyllid Biology: Psyllid nymphs and adults feed on sugar rich phloem. Honeydew, is a sticky waste product excreted by nymphs and adult psyllids after digesting phloem. As nymphs feed they can use honeydew excretions to form a protective white cap called a "lerp," the conspicuous white cone seen on eucalyptus leaves. Nymphs feed and grow to adulthood under this crystalline cap. Upon completing development, winged adults leave the protection of the lerp and fly to new plants to mate, feed, and lay eggs. 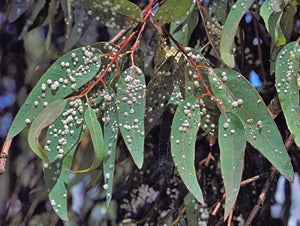 Damage: High density red gum lerp psyllid populations secrete copious amounts of honeydew and excessive feeding pressure causes premature leaf drop. Heavily infested leaves are readily noticeable because of the large numbers of white lerps encrusting the leaf surfaces. Falling leaves foul surfaces beneath infested trees such as vehicles parked under trees, and swimming pools, the bottoms of shoes are soiled when sticky leaves are walked on, and leaf drop results in the rapid accumulation of flammable material beneath trees and on the rooftops of houses and other buildings. Extensive and repeated defoliation events weaken trees, and contributes to the premature death of some highly susceptible species, in particular E. camaldulensis. In Southern California, thousands of mature E. camaldulensis were killed within 2-3 years by uncontrolled populations of red gum lerp psyllid. The removal costs for these dead trees must have cost home owners, city councils, community groups, and utility boards millions of dollars. Honeydew excretion promotes the unsightly growth of black sooty molds on leaves and branches, and honeydew dripping from heavily infested trees can stain concrete sidewalks. 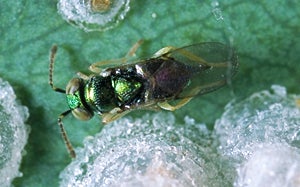 Biological Control of Red Gum Lerp Psyllid: A biological control program against red gum lerp psyllid has used the parasitoid Psyllaephagus bliteus. This natural enemy is native to Australia and was widely released in California from 2000 through 2002 to control the red gum lerp psyllid, after quarantine studies indicated that it posed no significant risk to other species. 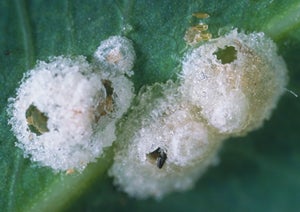 Laboratory studies have demonstrated that P. bliteus can lay eggs in psyllid nymphs of any age, but female parasitoids prefer third and fourth instars (red gum lerp psyllids have five nymphal stages or instars). To parasitize a psyllid nymph, female parasitoids use their ovipositor (an egg laying tube on the abdomen) to puncture nymphs and they then inject an egg into the body of the nymph once the ovipositor is inside the host. The parasitoid egg hatches and the P. bliteus larva then eats the host from the inside killing it. Once development is completed, the parasitoid pupates within the body of the host. To escape from the host's body, the parasitoid uses its mandibles to chew a circular hole which provides an exit. The presence of these exit holes is a very good indicator that P. bliteus is present and attacking red gum lerp psyllid nymphs.

In addition to parasitizing red gum lerp psyllid nymphs, female parasitoids can kill nymphs through host-feeding. Female P. bliteususe their ovipositor to either drill through the protective lerp or they slide their ovipositor under the lerp and repeatedly stab the red gum lerp psyllid nymph. Females feed on the body fluids that leak from these wounds, and the trauma from host feeding is often lethal to nymphs. Female P. bliteus will host-feed on all nymphal stages and they will also feed on lerps to gain nutrition from sugars within the lerp. Adult female parasitoids can live for several months. Maximum egg deposition (i.e., 88%) occurs within 22 days of adult emergence. Female parasitoids can lay 34-302 eggs over their life time with an average of 126 eggs being laid before death.

The biological control program with P. bliteus against the red gum lerp psyllid has been very successful in California's mild coastal regions, but has provided, only sporadic control in the hot dry interior regions of California. This result suggests that other strains of P. bliteus more tolerant to hot arid conditions need to be imported from Australia for potential release in California, or alternatively, a different species of parasitoid may be needed for areas where P. bliteus has provided inadequate control.