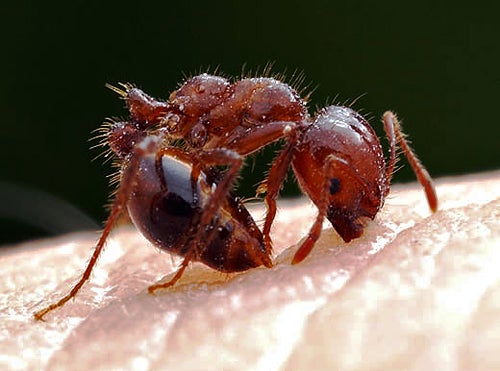 The Situation:  The Red Imported Fire Ant (RIFA, for short) is a major economic pest in the southeastern United States. It originates in lowland areas of South America, primarily Brazil and Argentina. Since its first documented interception in 1984 at a border station in California, periodic outbreaks have occurred in several counties. In the past, these outbreaks were limited to private properties amenable to rapid eradication efforts.  A state-wide eradication effort began in 1999 and ended in 2003. Some  localized eradication efforts are still continuing by Vector Control Districts (in the Coachella Valley and Orange County) and Agricultural Commissioner's offices (Los Angeles and San Diego counties) which have continued treatments aimed at controlling the ants. Eradication efforts by the California Department of Food and Agriculture also continue in the Central Valley. 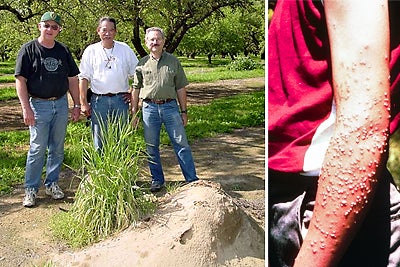 Damage:  These ants pose an immediate threat to the California's economy because they require a quarantine of nursery products because ants maybe accidentally shipped in potting soil to new areas. In quarantined areas, potted plants cannot be shipped without labor-intensive and expensive drenching of all plants with pesticides. The stinging behavior of Red Imported Fire Ant can be hazardous to field workers as the sting is noxious and produces a pustule on the skin that can scar if infected.  Newborn livestock and poultry are vulnerable to attack by ants. Foraging ants can clog irrigation lines and short-circuit electrical systems.  In natural ecosystems they may interfere with and displace native wildlife, young birds in nests and lizards can be especially vulnerable.

Economic Impact:  The farm gate values for ornamental production nurseries in Orange, Los Angeles and San Diego counties in 2002 was $1.3 billion, and ~40% of the crop was produced in these three counties, making it one of the major crops in these areas. The value of California's entire nursery industry in 2002 was estimated at $2.6 billion.This industry faces the immediate impact of quarantine regulations that require pesticide drenching before shipments can commence. There are immediate expenses involving the application of pesticides to all plants in quarantined areas. In Texas, over $1.1 billion is spent annually on pesticides for fire ant control, and $872 million of that is for control of ants infesting lawns in urban areas. 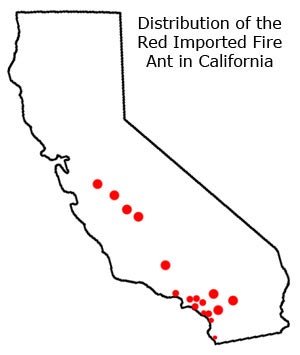 Distribution:  In 1997 fire ants arrived with honeybees from Texas and infested almond orchards in Kern and Fresno counties. In 1998 Red Imported Fire Ant were detected in an area covering at least 50 square miles of Orange County, leading to a quarantine of the entire county.  Other outbreaks have subsequently been discovered in western Riverside county (especially the Coachella Valley), and the counties of Los Angeles, San Diego, Santa Barbara, and Sacramento. Additional infested almond orchards have been found in Madera, Merced, and Stanislaus counties. Some of these infestations may have been present for 10 years before they were officially detected. RIFA have not been found in non-irrigated regions except in proximity to lakes (Lake Elsinore), and in natural wetlands and creeks in southern Orange Co. The most recent spreads (2008-2009) are into San Bernardino County from Los Angeles County, especially into Chino Hills and Ontario.

Research:  Cooperative Extension at the University of California, Riverside, is educating homeowners, pest control operators, growers, and other affected parties, about the biology and control of fire ants.  Research has involved testing the efficacy of new fire ant insecticides for the California market, studying the ant's flight behavior, and looking at competition with native ant species. We are pursuing the introduction of biocontrol agents for fire ants.