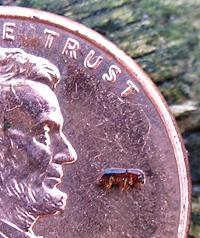 The Situation:In 2002, a non-native insect, the redbay ambrosia beetle, Xyleborus glabratus (Coleoptera: Scolytidae), was first detected in the United States near Port Wentworth, Georgia. The beetle was likely introduced in untreated wooden packing material, such as crates and pallets, imported through the shipment of goods from its native range in southeast Asia (e.g., India, Japan, Myanmar, and Taiwan). Adult beetles are small, 2 mm long, slender, cylindrical, and brown-black in color. The larvae are white, legless grubs
with an amber colored head capsule and are found feeding in galleries in infected trees. These beetles can be difficult to identify, and a specialist should be consulted for positive identification of adults and larvae due to their similarity to other closely related species.

The Problem: By 2005, about three years after the redbay ambrosia beetle was first found on the East coast of the USA, it was found to be associated with redbay (Persea borbonia) and sassafras (Sassafras albidum) mortality in coastal areas of Georgia, South Carolina, and Florida. Potential host plants in the Eastern USA will likely include all members of the Lauraceae family such as Asian spicebush (Lindera latifolia), yellow litsea (Litsea elongate), and the threatened and endangered native species pondspice (Litsea aestivalis) and pondberry (Lindera melissifolia). The major cause of plant death is not so much feeding by adult and larval beetles, but from a plant pathogen, the laurel wilt fungus, Raffaelea lauricola, which is lethal to native US plants in the family Lauraceae, the group to which redbay ambrosia beetle attacks. When adult beetles attack a tree they introduce into feeding tunnels spores of the fungus. The spores used to inoculate a tree are carried in special structures called mycangia which are found on the beetle's mandibles or biting mouthparts. These mycangia exist as a pair, one on each mandible. As the fungus grows it destroys the food and water conducting systems of the tree eventually killing it. The adult and larval beetles living in the infected tree feed on the fungus (i.e., the ambrosia, a term from Greek mythology which described the food [honey] of the Gods, not laurel wilt fungus.)

In the Southeast USA, redbay is an important tree species in the coastal plain. The economic importance of this tree is limited to cabinet making, boatbuilding, and veneer work. In urban areas, redbay trees are often planted or are purposefully left in during construction to beautify landscapes. Redbay are of ecological importance to many species of birds that feed on the fruit, and deer and bear browse on the foliage and berries. The Palamedes swallowtail (Papilio palamedes) depends on redbay for the completion of its lifecycle; the larvae feed primarily on redbay leaves and as redbay declines because of the redbay ambrosia beetle and laurel wilt fungus it is possible that animals relying on this common plant will suffer and the ecology of these native forest communities will be greatly changed.

Damage: Damage to trees infested with redbay ambrosia beetles is identifiable by the emergence of saw dust tooth picks that radiate from the trunks and branches of infested trees. These toothpicks are the frass or excreta of feeding beetles being pushed out of feeding galleries. Examination of the inside of the trunk will reveal bluish staining caused by the laurel wilt fungus. When taken together, the appearance of tunnels, tooth picks, and bluish staining is strongly suggestive that a tree is infested with beetles and fungus, especially if the host plant is a member of the Lauraceae.

Spread: One major way that the redbay ambrosia beetle and laurel wilt fungus will spread quickly out of the southeast USA is via the movement of wood that is infested with beetles (larvae or adults). Consequently, redbay and other host woody forest species from infested areas should not be moved or sold as firewood. Tree trimmings, BBQ smoke-wood, and mulch all have the potential to move the beetle and the fungus into new areas. Efforts should be made to reduce the likelihood that the beetle and the fungus will be introduced again into new areas in wooden packing materials originating from the home range of these pests in southeast Asia. 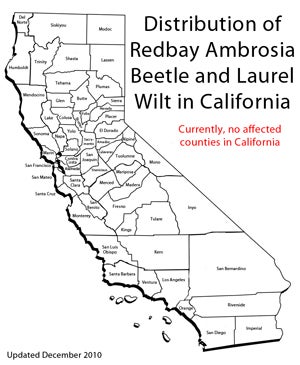 The Threat to California, Mexico, and Central and South America:Redbay ambrosia beetle and laurel wilt fungus pose a dire threat to California, and also to Mexico and countries in Central and South America. The two big problems accidental introduction of these pests into California will cause are the death of avocado trees (Persea americana) and native California bay laurels (Umbellularia californica). Research in Florida has clearly demonstrated that avocados and California bay laurel are very susceptible to attack by redbay ambrosia beetles and infection by laurel wilt fungus occurs and plant death results.

Avocados are an iconic California crop, and the state has the largest avocado industry in the USA. There are approximately 6,000 avocado growers in California farming around 66,000 acres, and in 2007-2008 the Hass avocado harvest was valued at $328 million. Redbay ambrosia beetle and laurel wilt fungus would present a formidable management challenge to avocado growers and homeowners with backyard trees.

California bay laurel trees (also known as pepperwood, Oregon myrtle or myrtlewood), are a common and attractive native West coast evergreen tree that can grow up to 30 m tall. Bay laurels have a range that extends from the Northern Baja Peninsula, into the foothills of the Western Sierras and north into Oregon. California bay laurels occupy habitat from around sea level up to 1,600 m in elevation.

Redbay ambrosia beetle and the laurel wilt fungus pose a severe threat to cultivated and wild avocados in Mexico, Central America, and South America. The avocado is native to cloud and subtropical forests in central Mexico and the native range of this tree extends into the highlands of Guatemala, Costa Rica, and Panama in Central America. Widespread mortality of avocados will affect Mexican farmers who are the world's largest producers of fresh avocados, subsistence farmers and families who cultivate avocados in small gardens, and incredible wildlife, in particular birds like the Quetzal (the national icon of Guatemala). Quetzals feed on small wild avocados and fruit of other trees in the family Lauraceae and swallow these fruit whole. They later regurgitate the pits helping to spread seeds of wild avocados and other closely related trees through the forests.