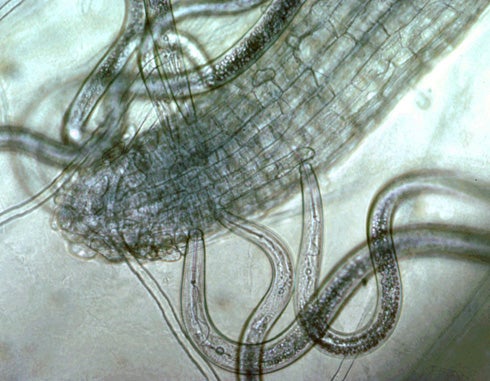 The Situation: The Sting nematode is an important pathogen on most agricultural and horticultural crops, including turf, citrus and grapes. This ectoparasite is native to sandy soils in the southeastern and Midwestern United States. In 1992, UC Riverside nematologists discovered that several golf courses in the Coachella Valley were heavily infested with sting nematodes. The warm climate, irrigated sandy soils of California inland deserts and the ability of the nematode to feed on a very wide range of hosts offer ideal conditions for rapid multiplication and spread of the invasive pathogen.

Damage: Like all plant parasitic nematodes, B. longicaudatus feeds by puncturing plant cells with a mouth stylet and withdrawing cell contents. It does not enter the roots but attacks from the outside, mainly near the root tip. Its long mouth stylet can damage the meristematic cells leading to stunting of the roots. Feeding wounds are often points of entry for disease-causing microorganisms which otherwise would not be able to enter healthy plant tissues. These secondary infections increase the stress on the plants and can accelerate cell and root death. Above-ground disease symptoms are non-specific. They typically resemble symptoms associated with plant drought stress and nutritional deficit such as stunted growth and leaf chlorosis followed by necrosis and death.

Economic Impact: The sting nematode is considered one of the most damaging of all plant parasitic nematodes. Yield and quality reductions in many agricultural crops can be so severe that it may result in a complete loss. Spread of this nematode in California could have disastrous impact on the turf and agricultural industries with additional negative repercussions on the tourist and recreational industries. 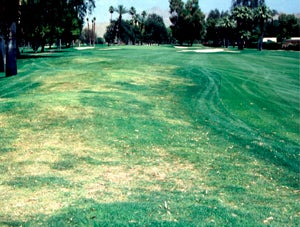 Distribution: Surveys by the state, county and UC Riverside Nematology experts revealed the presence of the sting nematode in several golf courses and adjacent home lawns. All infestation sites are located in the Rancho Mirage area. In order to limit the potential spread of B. longicaudatus, all known infested sites are subject to state and county enforced compliance agreements. Soil and plant residues from properties that potentially harbor the nematode may not be discarded without approved treatment.

Research: Regulatory authorities recognize the Nematode Quarantine Facility at the University of California, Riverside, as the only place in the state where research on sting nematode can be conducted safely. Half of a century after the first description of this nematode, UCR researchers succeeded in culturing the nematode in vitro on root cultures and observing its complete life cycle. Further studies have concentrated on population dynamics and control of this nematode. In collaboration with colleagues from the University of Florida, a recently discovered parasite of B. longicaudatuswas described. It is being evaluated as a potential biocontrol organism for the sting nematode. Another major aspect of UCR's Nematology program is the extension of information through Cooperative Extension to golf course superintendents, pest control advisers and homeowners in order to mitigate the risk of further spread of this nematode in California.

More Media on the Nematodes