The Situation: The rosewood tree, Tipu, or "Pride of Bolivia",Tipuana tipu (Fabaceae), is native to South America (South Brazil, Argentina, Uruguay, Paraguay, Bolivia) and is widely grown as a landscape ornamental and shade tree in southern California and elsewhere in the world (e.g., Egypt, Portugal, and Israel.) Tipu trees are popular because they are drought and frost tolerant, are thornless, exhibit moderate height at maturity (~10m), and have attractive pinnate green leaves, and clusters of bright yellow flowers. Seeds are winged and look strikingly similar to those produced by maples. In October 2008, the Tipu psyllid, a new pest record for California, was found feeding on this urban plant in San Diego County. 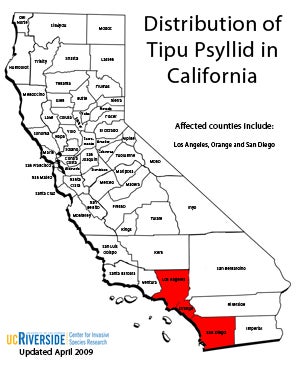 Damage: Tipu psyllid nymphs and adults nymphs are tiny insects that feed on phloem. All life stages (except eggs which are non-feeding) attack young leaves and branches of Tipu trees. Extensive feeding causes the leaves on host plants to curl and drop prematurely. Nymphs produce pelletized wax-like residue. Adults and nymphs produce copious amounts of honeydew which fosters the growth of black sooty mold on leaves and branches. The wax pellets produces by nymphs are very similar to those seen in the Eugenia psyllid, an exotic pest from Australia that attacks Eugenia and Syzigium in California. Tipu psyllids feed exposed, without the protection of flocculent waxes or pit like depressions in leaves.

This pest was first detected in October 2008 in Carlsbad in San Diego County in California. Interestingly, this insect has recently emerged as a serious pest of Tipu trees in Curibita Brazil. Pest populations in Curibtia are very high, trees are being defoliated, excessive honey dew excretion is fouling concrete sidewalks and vehicles parked under Tipu trees. Tipu psyllid populations in several southern California communities have produced similar fouling of objects and sidewalks beneath infested trees. In Curitiba, high density pest populations are attacked by lady bug beetles (Coleoptera: Coccinellidae) which provide some control of outbreaks. In the absence of natural enemies (e.g., predators, parasites, or pathogens) or insecticidal controls, the establishment of Tipu psyllid in California poses a significant threat to the health and value of Tipu tree plantings in California landscapes.