An intriguing fact to remember about tunicates is that, among the invertebrates, they may be our closest relatives! The adults don’t look like many of us, but the larval stage is a tadpole-like animal that has a nerve cord down its back and a notochord running the length of its body, that is related developmentally to our own spinal cord. Other invertebrates have a ventral rather than a dorsal nerve cord, and no spinal cord. Marine invasive species like these sea squirts are, of course, much more difficult to monitor and to control than their terrestrial counterparts. New detection methods, focused on planktonic larvae and DNA-based identification, promise to provide the early warning systems that are desperately needed in order to make progress in monitoring and hopefully controlling these invasions. 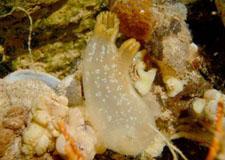 Ciona savignyi is an exotic tunicate originating in Asia. It can be recognized by its translucent body and the yellow or orange dots around the siphons. As in all solitary tunicates, there is a larger incurrent siphon that brings in water, and a smaller excurrent siphon that discharges water after it has been filtered inside the body of the squirt. 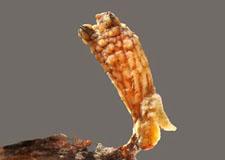 The club tunicate Styela clava is native to Asia but is now found all over the world. It can be recognized by its stalked body and bumpy appearance, and dark vertical stripes on the siphons. 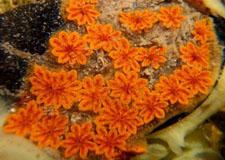 Botryllus schlosseri is a colonial tunicate that can easily be distinguished from other local species because its zooids (individual members of the colony) are arranged in regular star-shaped patterns. Each zooid has an incurrent siphon, but the zooids of each star share an excurrent siphon in the center. They are usually orange in color but sometimes come in other colors. This species is thought to have originated in northern Europe but is now global in distribution. 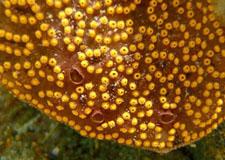 Botrylloides violaceus is another colonial tunicate, originating in Asia but now occurring all over the world. The zooids come in various colors but are usually yellow or orange. They are arranged in swirls, and have individual incurrent siphons but many share an excurrent siphon, seen as the larger openings between the zooids in the photograph.