The Situation: Vine mealybug was first found in California in the mid-1990s. Since then it has spread throughout the state, becoming among the most significant vineyard pests. Vine mealybug has a wide host range, feeding on several agricultural and weedy plant species. However, grapevines are a preferred host, and are the most adversely affected by this insect. Like other mealybugs, vine mealybug feeds on phloem sap, but it can be found throughout the plant - even on the roots. High reproductive rates and rapid development times promote severe infestations that are difficult to control. Furthermore, vine mealybug's tendency to feed under the bark and below the soil surface offers a refuge from contact insecticides and natural enemies. In some regions a mutualism with ants exists, whereby ants protect mealybugs from natural enemies and move them below ground to favorable microclimates in exchange for sugar rich honeydew. Successful control of this pest hinges on limiting spread of contaminated plant material complemented by early detection and rapid implementation of chemical and biological control of new infestations. Mealybug sex pheromone has been identified and has proven useful in identifying newly established populations.

Damage: Vine mealybug, even more so than other mealybugs, produces copious amounts of honeydew that causes sooty mold damage. High densities of the insect lead to decreased plant vigor, defoliation, and the insects themselves may be contaminants of grape clusters. However, because VMB is an efficient vector of grapevine leafroll associated viruses (GLRaV) it can cause damage even at relatively low densities. Effects of GLRaV infection differ among grape varietals. For the most susceptible varietals infection causes progressive reddening of leaves, curling of leaf margins, decreased plant vigor, and defoliation. Ultimately this delays fruit maturity and reduces berry quality and quantity at harvest. 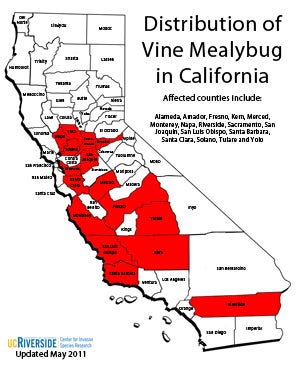 Distribution of vine mealybug and GLRaV: Vine mealybug occurs throughout the Mediterranean region, South Africa, parts of Asia, and Mexico. It was first documented in California in 1994 in the Coachella Valley (Riverside County). Since then vine mealybug has spread to the San Joaquin Valley, foothills of the Sierra Nevada, Central Coast, and eventually North Coast vineyards. The long range and rapid spread of the insect throughout the state is likely the result of transportation of contaminated nursery plant material and field equipment. As of 2007 vine mealybug is known to be established in 17 California counties, which include most of the major wine, raisin and table grape producers. With the exception of a putative eradication in El Dorado County, populations of vine mealybug persist in these regions. GLRaV is likely to have a worldwide distribution. Originally thought to be spread only by infected propagation material, GLRaV was considered a minor problem or even a boon for wine quality. Recent outbreaks in the Western US associated with new infestations of vine mealybug and other mealybug vectors have changed this perception. GLRaV is now prevalent throughout California vineyards and is considered a significant economic threat.

Research: Research includes methods to limit future spread and to control existing vine mealybug infestations. Spread via contaminated nursery stock or field equipment is a major concern for vine mealybug management. The efficacy of different sanitation methods, such as hot water baths or insecticide application, are being evaluated. Management of existing populations includes both chemical and biological control. Chemical control studies include tests of insecticide targeting the mealybug itself and poison bait stations for their ant mutualists. Moreover, mealybug sex pheromone is being used to study the efficacy of mating disruption. Classical and augmentative biological control are also being explored, with at least one parasitoid showing promise. A final area of ongoing research focuses on the transmission biology of GLRaV, which currently is poorly understood. Studies include characterization of mealybug vector - virus type specificity and transmission efficiency to understand the epidemiology of grape leafroll disease.