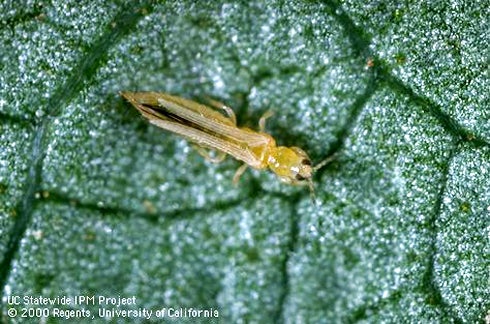 The Situation: In southern California, the native western flower thrips (WFT) Frankliniella occidentalis is the most common vector responsible for transmission of an exotic plant virus, Tomato Spotted Wilt Virus (TSWV). The pathogen was discovered on tomatoes in 1915 in Australia, and has been spreading around the world ever since. TSWV is a tospovirus (Bunyaviridae) of which there are at least 12 known plant pathogenic species that are spread by around 10 species of thrips. TSWV became problematic in California when a new highly pathogenic isolate established. This virus has become a major problem for pepper and tomato growers from Orange County to the Mexican border in San Diego County.

Damage: Once the plant is infected it can not be cured and different symptoms may be expressed depending on the strain of the virus. Typical symptoms include stunting, distortion, mottling, general necrosis, and ring spots. Virulent forms of the virus can kill plants resulting in major economic losses. When feeding thrips larvae acquire TSWV they are permanently infected (the virus replicates in the thrips and stays with them as they mature.) An infected adult that lands on a susceptible plant and starts feeding can transmit the pathogen in as little as 5 minutes. Large numbers of these pests migrating from other crops and weeds cause high levels of virus transmission and disease outbreaks. TSWV is highly mutable and can rapidly develop strains that overcome resistant host crop varieties. 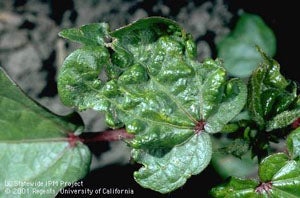 Economic Impact: Economic losses to California tomato producers can be dramatic, For example, in 1998 fresh market tomato growers in Southern California lost 50% of their tomato plants to TSWV transmitted by the western flower thrips. Other important crops affected by the WFT and TSWV include lettuce, peppers, eggplant, beans, cabbage, celery, artichokes, potatoes and a variety of ornamentals such as chrysanthemums, petunia, impatiens, gladiolus and Ranunculus. Because California produces 55% of the fresh vegetables grown in the United States, the economic losses that may occur can be immense.

Distribution: WFT and TSWV are found worldwide. Highly virulent strains of the virus are known from Orange and San Diego counties. Consequently, these highly pathogenic strains of virus can cause substantial economic losses in other counties with major domestic and export markets.

Research: Currently, there are few good techniques available for controlling this pathogen and its vector. The University of California is examining the population dynamics and movement of western flower thrips populations and the acquisition and spread of TSWV. Integrated pest management strategies including resistance host plant varieties, selective pesticides to kill thrips, screening of greenhouses to exclude thrips, alteration of planting dates, manipulation of row spacings, and use of virus free planting material are being developed to reduce the impact of this pathogen on vegetable and ornamental crops.