This stinkbug has a very broad host range having been recorded feeding on tree fruits, vegetables, shade trees, and legume crops, with a strong preference for apples, plums, pears, peaches, and cherries. It has caused significant economic damage to agricultural crops on the east coast, especially apples. In 2010, this pest replaced key apple pests, such as codling moth, as the primary pest attacking apples, and it was estimated that the economic impact to the apple industry on the east coast of the USA could have exceeded $37 million. Feeding damage results when immature BMSB (called nymphs) and adults puncture fruit with their piercing-sucking mouthparts. This feeding damage causes distortion of developing fruit and is referred to as “cat-facing.”

Brown marmorated stinkbug is a “true” bug, meaning it has piercing-sucking mouthparts (as opposed to chewing mandibles like you would find on a caterpillar or beetle) and it has incomplete metamorphosis whereby nymphs (the immature stages that develop following egg hatch) gradually adopt the adult shape and color each time they molt into the next developmental stage. Butterflies, moths, flies, and beetles, for example, have complete metamorphosis, whereby a larva develops into a pupa (a cocoon or chrysalis) and then emerges as an adult that doesn’t resemble the larva. Brown marmorated stink bug has six immature stages, the egg, and five nymphal stages, before reaching the adult form. 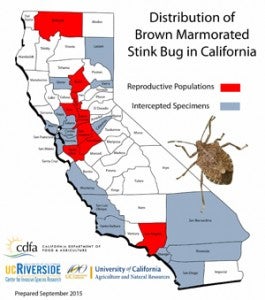 Management programs for this pest are being developed on the east coast and include; (1) biological control agents, (2) pesticide evaluations, and (3) pheromone traps to monitor the presence, abundance, and seasonal phenology of this pest. The biological control program is being developed by the USDA-ARS and is focusing on the use of egg parasitoids sourced from China, part of the pest’s native range. Surveys on the east coast have revealed that native stinkbug parasitoids are not effective at attacking BMSB eggs. This escape from natural enemies may be one potential reason why BMSB has proliferated in the USA.

In addition to damaging crops, BMSB forms very dense overwintering aggregations inside houses, sheds, and garages. Because these bugs have “stink glands” on the dorsal (top side) surface of the abdomen and ventral (bottom side) of the thorax this gives them an unpleasant characteristic odor, especially when disturbed. Consequently, having large numbers entering dwellings and a need to remove them physically can result in high levels of irritation for homeowners.

Detections of BMSB in California have occurred since at least 2005. Finds have occurred from Costa Mesa in Orange County in southern California north to areas around San Francisco. Detections have been made on transport and storage containers, vehicles, plants, boats, and firewood being shipped from the east coast to California. BMSB appears to be able to hitchhike considerable distances on these inedible structures. It is possible there are now breeding populations in and around Los Angeles County, especially the Pasadena area, where there have been reports of large overwintering aggregations forming inside garages.

In response to this emerging threat, the University of California Riverside, UC Cooperative Extension, and the California Department of Food and Agriculture have set up a cooperative project with the USDA-ARS to test pheromone traps to monitor for BMSB in Los Angeles County, and additional areas in northern California (e.g., around Stockton in San Joaquin County).

In southern California, trapping programs are being run in cooperation with the LA County Agricultural Commissioner’s office (Gevork Arakelian, the LA County Entomologist), private home owners in Pasadena, the Huntington Gardens and the LA Arboretum.

The trapping program is evaluating different types of lures that BMSB may find attractive in southern California. Identical trials are being run simultaneously over the summer (2013) on the east coast. The goal is to determine which lures are most effective at attracting BMSB and whether these results are consistent between the east and west coasts of the USA. The development of a sensitive and species specific monitoring tool will be very valuable for California as it will allow the detection of small populations before they become abundant and troublesome. Traps will also allow a more precise delineation of areas infested with BMSB in California without having to wait for homeowner reports or a need to undertake difficult and time consuming visual surveys of plants in areas suspected to be infected with BMSB. The next phase of the BMSB program for California will be to begin working with the USDA-ARS on developing a biological control program with egg parasitoids. Starting this program early, before BMSB becomes a severe problem similar to the east coast, could help greatly to alleviate economic losses and minimize the annoyances associated with overwintering aggregations inside houses.